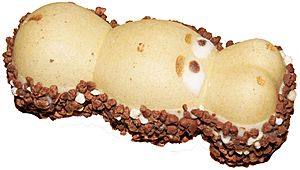 Kinder Happy Hippo is a biscuit/candy made by the Italian chocolate and confectionery company Kinder owned by Ferrero.

The candy consists of a wafer biscuit shaped like a hippopotamus. Inside the crisp hollow biscuit are two flavors of icing: milk-flavored and hazelnut cream in the original flavor, milk cream and chocolate cream in the cocoa flavor.

Happy Hippo were made famous by a series of popular animated commercials featuring a dog and a hippo getting into various situations that generally end in the two sharing a Happy Hippo biscuit. The original light blue Happy Hippo character was created by the French designer André Roche for Ferrero chocolates in 1987 and became famous worldwide due to its repeated appearances as a toy in easter eggs The Happy Hippo toys came in various costumes and character designs, including an authorized parody character (named "Hipperium") from the George Lucas Star Wars trilogy.

The term Happy Hippos was also used for Horrid Henry's parody of Teletubbies.

All content from Kiddle encyclopedia articles (including the article images and facts) can be freely used under Attribution-ShareAlike license, unless stated otherwise. Cite this article:
Kinder Happy Hippo Facts for Kids. Kiddle Encyclopedia.