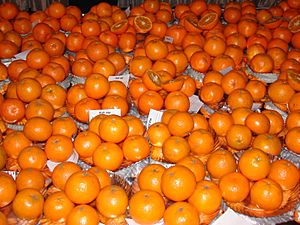 The 'Kinnow' is a high yield mandarin hybrid cultivated extensively in the wider Punjab region of India and Pakistan.

It is a hybrid of two citrus cultivars — 'King' (Citrus nobilis) × 'Willow Leaf' (Citrus × deliciosa) — first developed by Howard B. Frost, at the University of California Citrus Experiment Station. After evaluation, the 'Kinnow' was released as a new citrus hybrid for commercial cultivation in 1935. 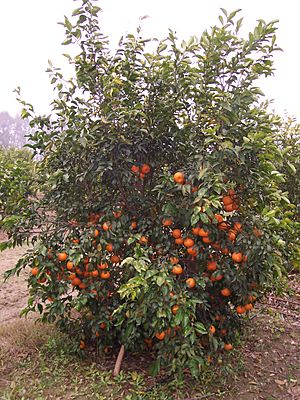 The fruit matures in January or February. It peels easily and has a high juice content.

The high seed content in this variety is a major hindrance in out-of-hand eating. Mikeal Roose of University of California, Riverside, USA developed low seeded 'Kinnow' and this variety was released under the name 'Kinnow LS' in the year 2011. H.S.Rattanpal of Punjab Agricultural University, Ludhiana, India developed low seeded 'Kinnow' through mutation breeding and recommended it under the name 'PAU Kinnow-1' in the year 2015. In Pakistan, a seedless 'Kinnow' has been developed (using selection method) by Niaz Ahmad Chaudhry '[1][2]', a team member of National Agricultural Research Centre (NARC), Islamabad 'NARC' (former director of Citrus Research Institute, Sargodha,'CRI'.

Most of the target export markets of Indian and Pakistani 'Kinnow' are those of developing countries. Only 2.6 percent of Kinnow exports target the markets of developed countries, which is due to the emerging demand for seedless Kinnow by the developed countries. About 61 percent of total world exports of oranges and mandarins are of seedless varieties. Some important export markets for 'Kinnow' are:Iran, Bahrain, United Arab Emirates, Kuwait, Oman, Qatar, Saudi Arabia, Indonesia, Malaysia, Afghanistan, Netherlands, Philippines, Singapore, the United Kingdom, Russia and Vietnam. Indonesia has also offered market access to Kinnow, from Pakistan at zero per cent. Over 40% of the Pakistani exports of Kinnows went to Russia in 2015. Internally, the prices of Kinnow in Pakistan dropped more than 50% between 2016 to 2020. 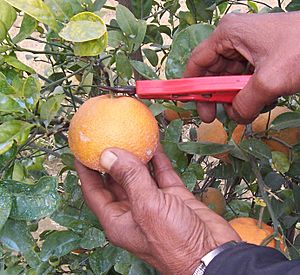 Picking of Kinnow with clippers

The 'Kinnow' fruit seeds are planted in the month of August-October. 'Kinnow' harvesting starts when the fruit's external colour becomes orange, from December to February. The best harvesting time is mid-January to mid-February, when the fruit attains a TSS/acid ratio of 12:1 to 14:1. The fruit quality declines in later pickings. Fruits are harvested by clipping the stem with the help of sharp clippers (secateurs). The stem is cut as short as possible to avoid mechanical injury to the fruit in packing and transits. As it is a comparatively loose rind fruit, harvesting by pulling fruits with one's hands is avoided. Coating 'Kinnow' fruits with commercial waxes can increase the shelf life up to 60 days. The fruit can be stored in cold storage at a temperature of 4-5 °C and a relative humidity of 85-90%. 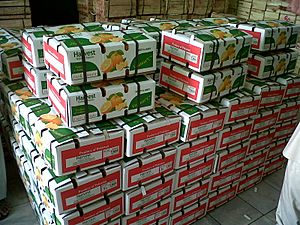 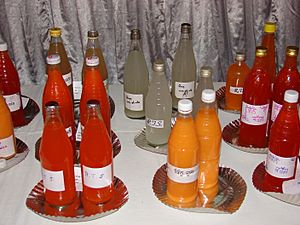 Food processing includes the selection of good-quality fruit. The ideal 'Kinnow' is firm to slightly soft, smooth-skinned with no deep grooves, and deep orange to almost red. Human hands can better judge and avoid product with soft spots, dull and faded coloring or rough and bumpy skin. Many processing technologies have been developed by state agricultural universities and other research institutes of India. Kinnow fruits can be stored at room temperature conditions or under cold storage conditions.

All content from Kiddle encyclopedia articles (including the article images and facts) can be freely used under Attribution-ShareAlike license, unless stated otherwise. Cite this article:
Kinnow Facts for Kids. Kiddle Encyclopedia.