The knobbed whelk is a species of very large predatory sea snail, or in the USA, a whelk, a marine gastropod mollusk in the family Busyconidae, the busycon whelks.

The knobbed whelk is the second largest species of busycon whelk, ranging in size up to 12 in (305 mm).

Knobbed whelks are native to the North Atlantic coast of North America from Cape Cod, Massachusetts to northern Florida. This species is common along the Georgia coast.

It is the state shell of New Jersey and Georgia. 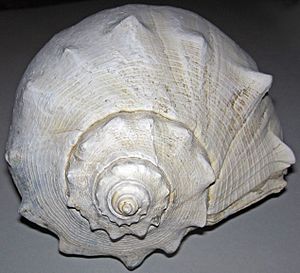 The shell of most knobbed whelks is dextral, meaning that it is right-handed. If the shell is held in front of the viewer, with the spiral end up and the opening facing the viewer, the opening will be on the animal's right side.

The shell is thick and strong and has six clockwise coils. The color is ivory or pale gray, and the large aperture (the inside of the opening) is orange. The canal inside is wide and the entrance can be closed. 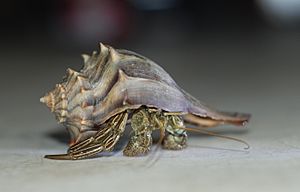 Hermit Crab in a shell of Knobbed whelk

The knobbed whelk lives below the low tide mark and is migratory, alternating between deep and shallow water, depending on the time of year.

During the weather extremes of the summer and winter months, these sea snails live in deep water, at depths of up to 48m. In the milder weather of the spring and fall they live in shallow water, on near-shore or intertidal mud flats and sand flats.

On the shallow-water mud flats whelks prey on oysters, clams, and other freshwater molluscs. 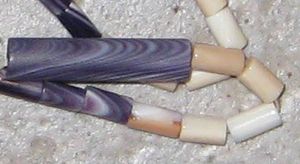 As with conchs, the knobbed whelk is used by humans as food in such dishes as salads (raw), burgers, fritters, and chowders.

As is also true of conch shells, the shell of the knobbed whelk can be made into a natural bugle by cutting off the tip of the spire in order to form a mouthpiece.

Historically, American Indians used the knobbed whelk as a component in wampum, the shell beads exchanged in North America for trade.

All content from Kiddle encyclopedia articles (including the article images and facts) can be freely used under Attribution-ShareAlike license, unless stated otherwise. Cite this article:
Knobbed whelk Facts for Kids. Kiddle Encyclopedia.