Kids Encyclopedia Facts
This page is about the soup. For the television series, see Chowder (TV series).

Chowder is a type of soup or stew often prepared with milk or cream and thickened with broken crackers, crushed ship biscuit, or a roux. Variations of chowder can be seafood or vegetable. Crackers such as oyster crackers or saltines may accompany chowders as a side item, and cracker pieces may be dropped atop the dish. New England clam chowder is typically made with chopped clams and diced potatoes, in a mixed cream and milk base, often with a small amount of butter. Other common chowders include seafood chowder, which includes fish, clams, and many other types of shellfish; corn chowder, which uses corn instead of clams; a wide variety of fish chowders; and potato chowder, which is often made with cheese. Fish chowder, corn chowder, and clam chowder are especially popular in the North American regions of New England and Atlantic Canada.

Some people include Manhattan clam chowder as a type of chowder, but since it has no milk or cream and is tomato-based, it is actually more like a vegetable soup with clams. 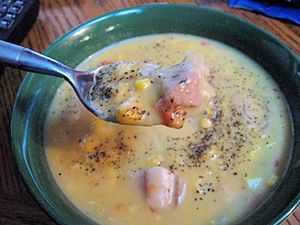 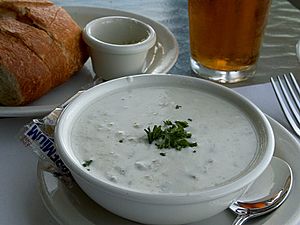 The origin of the term chowder is obscure. One possible source is the French word chaudron, the French word for cauldron, the type of cooking or heating stove on which the first chowders were probably cooked. Chodier was also a name for a cooking pot in the Creole language of the French Caribbean islands.

In Merriam-Webster's dictionary chowder is defined as "a thick soup or stew made of seafood or corn with potatoes and onions and milk or tomatoes". 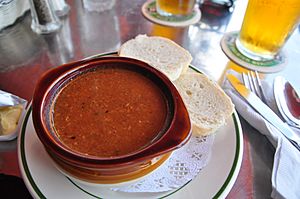 Considered a national dish of Bermuda, the primary ingredients in Bermuda fish chowder include fish, tomato, and onion that is seasoned with black rum and a Sherry pepper sauce. The dish is of British origin, and was brought to the New World by the colonists.

Clam chowder may be prepared with fresh, steamed clams or canned clams. The "clam liquor" from steamed or canned clams may be retained for use in the soup, and fresh or bottled clam juice may be used. January 21 is the National New England Clam Chowder Day.

Corn chowder is similar in consistency to New England clam chowder, with corn being used instead of clams. Additional vegetables that may be used in its preparation include potatoes, celery and onion. Some are prepared using bacon as an ingredient. Corn chowder may be prepared with fresh, frozen, or canned corn.

Fish chowder is prepared with fish such as salmon or cod, and is similar to clam chowder in ingredients and texture. Ingredients used in fish chowder may include potato, onion, celery, carrot, corn and bacon.

Southern Illinois Chowder, also referred to as "downtown chowder", is a thick stew or soup that is very different from the New England and Manhattan chowders. The main ingredients are beef, chicken, tomatoes, cabbage, lima beans, and green beans. Traditionally, squirrel meat was a common addition. Southern Illinois chowder is a hearty dish that has been described as being closer in style to burgoo and Brunswick stew than coastal chowders.

Seafood chowder is prepared with various types of seafood as a primary ingredient, and may be prepared as a broth- or cream-style chowder.

Spiced haddock chowder is made with haddock fillets, carrot, potato, plain flour, bay leaves, peppercorns mustard, and spices added to milk and cooked in a pot with butter.

The White Castle restaurant serves a potato and bacon chowder.

All content from Kiddle encyclopedia articles (including the article images and facts) can be freely used under Attribution-ShareAlike license, unless stated otherwise. Cite this article:
Chowder Facts for Kids. Kiddle Encyclopedia.