The company was founded in 1994 in Sweden by Christian von Koenigsegg, with the intention of producing a "world-class" sports car. Many years of development and testing led to the CC8S, the company's first street-legal production car which was introduced in 2002.

In 2006, Koenigsegg began production of the CCX, which uses an engine created in-house especially for the car. The goal was to develop a car homologated for use worldwide, particularly the United States whose strict regulations didn't allow the import of earlier Koenigsegg models.

In March 2009, the CCXR was listed by Forbes as one of "the world's most beautiful cars".

In December 2010, the Agera won the BBC Top Gear Hypercar of the Year Award.

The factory building in Ängelholm, Sweden

Apart from developing, manufacturing and selling the Koenigsegg line of sports cars, Koenigsegg is also involved in "green technology" development programmes beginning with the CCXR ("Flower Power") flex-fuel sports car and continuing through the present with the Jesko.

Koenigsegg is also active in development programs of plug-in electric cars' systems and next-generation reciprocating engine technologies. Koenigsegg has also developed a camless piston engine which found its first application in the Regera, which was introduced in 2015. 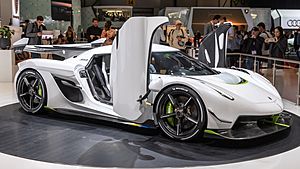 Koenigsegg develops and produces most of the main systems, subsystems and components needed for their cars in-house instead of relying on subcontractors.

In January 2019, Koenigsegg sold a 20 percent minority stake in the company to a Chinese funded company, National Electric Vehicle Sweden (NEVS), for US$171 million. They also announced the formation of a new joint venture to make cars using technologies from both companies. The new company will manufacture cars in Trollhättan, Sweden, as well as in China. 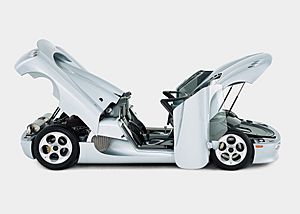 The initial design of the CC was penned down by Christian von Koenigsegg. Industrial designer David Crafoord realised the sketches as a 1:5 scale model. This model was later scaled up in order to create the base plug for the initial Koenigsegg prototype that was finished in 1996. During the next years, the prototype went through extensive testing and several new prototypes were built.

The prototypes initially used an Audi V8 engine but after the engine supply contract fell through, the next candidate was the Flat-12 race engine developed by Motori Moderni. These Subaru 1235 engines were purchased and modified for use in the CC, this deal failed when the founder of Motori Moderni died, sending the company into bankruptcy. Eventually a Ford Modular V8 engine was chosen, which found its way to the company's first production car. 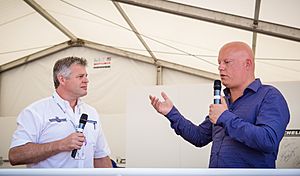 Christian von Koenigsegg got the idea to build his own car after watching the Norwegian stop-motion animated movie Pinchcliffe Grand Prix in his youth. He took his first steps in the world of business in his early 20s running a trading company called Alpraaz in Stockholm, Sweden. Alpraaz exported food from Europe to the developing world. The success of this venture gave von Koenigsegg the necessary financial standing to launch his chosen career as a car manufacturer.

Initially, Koenigsegg Automotive was based in Olofström. In 1997, the company needed larger production facilities and moved to a farm, just outside Ängelholm. On 22 February 2003, one of the production facilities caught fire and was badly damaged. Koenigsegg then acquired an abandoned air field to use as his new factory building and in late 2003, one of the two large fighter-jet hangars and an office building were converted into a car factory. 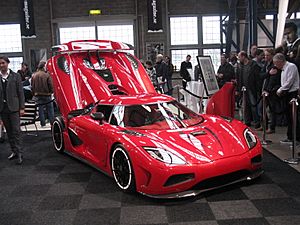 Since then, the company is located near the still-active Ängelholm airport, clients can arrive by private jet nearby. Koenigsegg controls and uses the former military runway for shakedown runs of production cars and high-speed testing.

The Koenigsegg badge was designed in 1994 by Jacob Låftman, based on the heraldic coat of arms of the Koenigsegg family. The shield has been the family's coat of arms since the 12th century when a family member was knighted by the Germany-based Holy Roman Empire.

All content from Kiddle encyclopedia articles (including the article images and facts) can be freely used under Attribution-ShareAlike license, unless stated otherwise. Cite this article:
Koenigsegg Facts for Kids. Kiddle Encyclopedia.