The Pinchcliffe Grand Prix (Norwegian: Flåklypa Grand Prix) is a Norwegian stop motion-animated feature film directed by Ivo Caprino. It was released in 1975 and is based on characters from a series of books by Norwegian cartoonist and author Kjell Aukrust.

It is the most widely seen Norwegian film of all time, having sold some 5.5 million tickets since its release to a population which currently numbers just over 5 million. 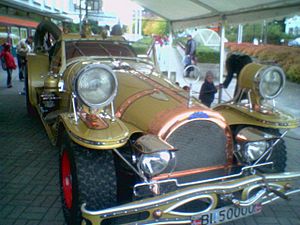 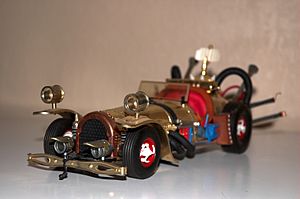 In the village of Flåklypa, (En. Pinchcliffe), the inventor Reodor Felgen (En. Theodore Rimspoke) lives with his animal friends Ludvig (En. Lambert) (a nervous, pessimistic and melancholic hedgehog) and Solan Gundersen (En. Sonny Duckworth) (a cheerful and optimistic magpie). Reodor works as a bicycle repairman, though he spends most of his time inventing weird Rube Goldberg-like contraptions. One day, the trio discover that one of Reodor's former assistants, Rudolf Blodstrupmoen (En. Rudolph Gore-Slimey), has stolen his design for a race car engine and has become a world champion Formula One driver. Solan secures funding from Arab oil sheik Ben Redic Fy Fazan (En. Abdul Ben Bonanza), who happens to be vacationing in Flåklypa, and to enter the race, the trio builds a gigantic racing car: Il Tempo Gigante—a fabulous construction with two extremely big engines (weighing 2.8 tonnes alone and making the seismometer in Bergen show 7.8 Richter when started the first time), a body made out of copper, a spinning radar (that turns out to be useful when Blodstrupmoen starts engaging in smoke warfare during the race) and its own blood bank. Reodor ends up winning despite Blodstrupmoen's attempts at sabotage.

In 2000 a computer game based on the film was released. The game was created by Tyr Neilsen who was Creative Director and in charge of production at Ingames Interactive until a debilitating accident ended his video game career. The project was taken over and completed by Caprino's son Remo, while his grandson Mario was lead programmer. The lead designer was Joe Dever. The game was ported to Nintendo DS in 2010. The game sold over 380,000 copies in Norway.

Norwegian hip-hop duo Multicyde based their 1999 single "Not for the Dough" on a sample from the movie's soundtrack and featured excerpts from the movie in the song's music video.

All content from Kiddle encyclopedia articles (including the article images and facts) can be freely used under Attribution-ShareAlike license, unless stated otherwise. Cite this article:
The Pinchcliffe Grand Prix Facts for Kids. Kiddle Encyclopedia.