The Kohl Center is an arena and athletic center at the University of Wisconsin–Madison, United States. The building, which opened in 1998, is the home of the university's men's basketball and ice hockey teams, and the women's basketball team. It also housed the university's women's ice hockey team through 2012, after which they moved into the adjacent LaBahn Arena. Seating capacity is variable, as the center can be rearranged to accommodate a basketball court, a hockey rink, or a concert. The maximum capacity is 17,287 in its basketball configuration, and 15,359 for ice hockey. The center has three levels, with the floor holding about 7,500 people, and the two upper balconies about 4,500 each. It is the second largest indoor venue in Wisconsin and the largest outside Milwaukee. The arena is located on the southeast corner of the UW–Madison campus, at the intersection of West Dayton and North Frances Streets.

The sporting arena is named after former United States Senator and former Milwaukee Bucks owner Herb Kohl, who donated $25 million of his Kohl's department/grocery store fortune to the building project. At the time it was the largest single donation in University of Wisconsin System history. Because of the donor's first name, it is sometimes locally referred to as the "Herb Garden". Former Wisconsin Badgers basketball player Albert Nicholas and his wife donated $10 million toward the project, with the adjoining practice pavilion named the Nicholas-Johnson Pavilion and Plaza. Jack F. Kellner and his sons donated an additional $2.5 million to the project. Wisconsin-based Hammes Company developed the arena for UW–Madison in 1993. The Boldt Company was the project's general contractor. 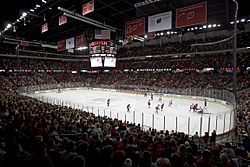 Prior to the Kohl Center, the basketball teams played at the Wisconsin Field House, while ice hockey was played at the Dane County Coliseum. The hockey teams still may play there if there is an event conflict, because basketball has scheduling priority. Originally, the overhead scoreboard from the UW Field House was installed in the Kohl Center because the cost of a new scoreboard unit wasn't included in the figure for the new arena. The old scoreboard remained in the Kohl Center for seven years, and after the money was raised, a new and modern circular unit was bought and installed before the 2004–2005 winter sports season. At the same time a LED ribbon board was installed, which surrounds the arena below the second balcony, displaying advertising, messages, and scores. The design of the Kohl Center is modeled somewhat after that of the Field House with cantilevered balconies instead of a setback style. This was done to intimidate opponents and bring all fans close to the action.

A bar and restaurant was added to the second level in 2005. The area is for pre-game gatherings of boosters who have made donations to the athletic department.

In 2006 a second student-athlete academic center was built on the lower level of the Kohl Center to provide student athletes easier access to academic services. Prior to the 2006 men's basketball season, the UW Athletic Department sold 48 courtside seats, at a price of $10,000 to $12,500 each. The available seats sold out, and a waiting list was created for the sale of seats that become available in the future. Space for the seats was created by eliminating part of the courtside seating for media. The addition of these seats has increased maximum capacity for men's basketball from 17,142 to 17,190.

Prior to the 2008–2009 season some of the seating in the upper deck was also reconfigured, adding more seating to the arena to bring capacity for men's basketball to 17,230.

The athletic department's master plan included adding a practice rink for ice hockey after construction of the Kohl Center. One configuration under consideration placed the rink next to the Nicholas Johnson Pavilion, where it would serve as an alternative practice facility for the men's hockey team and a game and practice facility for the women's hockey team. This was realized as LaBahn Arena, which opened in 2012. 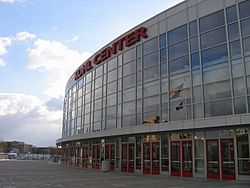 The Kohl Center also hosts the annual Varsity Band Spring Concert, an event that began in March 1975 and has grown into a three-night affair with professional staging, lighting, sound and pyrotechnics. The concert averages 25,000 attendees every year.

On February 12, 2008, Democratic presidential candidate Barack Obama spoke before a crowd of over 17,000 prior to the Wisconsin primary. The 2008 Jeopardy! College Championship was taped on April 11 and 12, 2008, at the Kohl Center.

The Opening and Closing Ceremonies of the 2011 Science Olympiad National Tournament were held at the Kohl Center on May 20 and 21, 2011.

On October 8, 2016, the Milwaukee Bucks hosted a preseason game vs. the Dallas Mavericks at the Kohl Center.

On October 30, 2017, DJ Khaled hosted a concert at the Kohl Center after UW Student Sam Jeschke handed out 43,000 bottles of Mentos Gum.

On September 2, 2018, Metallica performed a concert at the stadium during its WorldWired Tour.

All content from Kiddle encyclopedia articles (including the article images and facts) can be freely used under Attribution-ShareAlike license, unless stated otherwise. Cite this article:
Kohl Center Facts for Kids. Kiddle Encyclopedia.