Kottanad is a village in Pathanamthitta district, Kerala, India.

Like the other parts of the state, Kottanad has a wet and maritime tropical climate. The region receives most of the rain from the South-West monsoon and the North-East monsoon. Summer is from March to May. During these times the place receives locally developed thundershowers. Due to the higher elevation, the climate is cooler towards the eastern area. 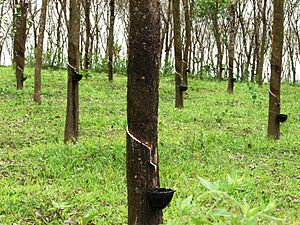 Rubber Trees in a Plantation

The economy of Kottanad is mainly from agriculture. Kottanad is one of the rubber producing villages in Kerala. Other major crops are coconut, tapioca and pepper.

Kottanad Village is a part of Pathanamthitta district administration. The Kottanad village office is in Perumpetty.

All content from Kiddle encyclopedia articles (including the article images and facts) can be freely used under Attribution-ShareAlike license, unless stated otherwise. Cite this article:
Kottanad Facts for Kids. Kiddle Encyclopedia.