Kowtow, which is borrowed from kau tau in Cantonese (ketou in Mandarin Chinese), is the act of deep respect shown by prostration, that is, kneeling and bowing so low as to have one's head touching the ground. The date of this custom's origin is probably sometime between the Spring and Autumn period, or the Warring States period of China's history because it is already known to have been a custom by the time of the Qin dynasty (221 BC – 206 BC).

In East Asian culture, the kowtow is the highest sign of deep respect. It was widely used to show appreciation for one's elders, superiors, and especially the Emperor, as well as for religious and cultural objects of worship. In modern times, usage of the kowtow has become reduced. 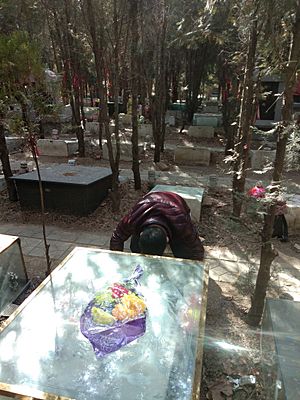 Kowtowing to ones dead relatives

In Imperial Chinese protocol, the kowtow was performed before the Emperor of China. Depending on the the situation different grades of kowtow would be used. In the most solemn of ceremonies, for example at the coronation of a new Emperor, the Emperor's subjects would undertake the ceremony of the "three kneelings and nine kowtows", the so-called grand kowtow, which involves kneeling from a standing position three times, and each time, performing the kowtow three times while kneeling.

As government officials represented the majesty of the Emperor while carrying out their duties, commoners were also required to kowtow to them in formal situations. For example, a commoner brought before a local magistrate would be required to kneel and kowtow. A commoner is then required to remain kneeling, whereas a person who has earned a degree in the Imperial examinations is permitted a seat.

Since one is required by Confucian philosophy to show great reverence to one's parents and grandparents, children may also be required to kowtow to their elderly ancestors, particularly on special occasions. For example, at a wedding, the marrying couple was traditionally required to kowtow to both sets of parents, as acknowledgement of the debt owed for their nurturing. 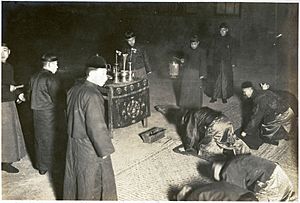 Confucius believed there was a natural harmony between the body and mind and therefore, whatever actions were expressed through the body would be transferred over to the mind. Because the body is placed in a low position in the kowtow, the idea is that one will naturally convert to his or her mind a feeling of respect. What one does to oneself influences the mind. Confucian philosophy held that respect was important for a society, making bowing an important ritual. 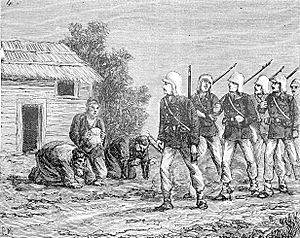 The kowtow, and other traditional forms of reverence, were much run down after the May Fourth Movement. Today, only traces of the traditional usage of the kowtow remain. In many situations, the standing bow has replaced the kowtow. For example, some, but not all, people would choose to kowtow before the grave of an ancestor, or while making traditional offerings to an ancestor. Direct descendants may also kowtow at the funeral of an ancestor, while others would simply bow. During a wedding, some couples may kowtow to their respective parents, though the standing bow is today more common. In extreme cases, the kowtow can be used to express profound gratitude, apology, or to beg for forgiveness.

All content from Kiddle encyclopedia articles (including the article images and facts) can be freely used under Attribution-ShareAlike license, unless stated otherwise. Cite this article:
Kowtow Facts for Kids. Kiddle Encyclopedia.