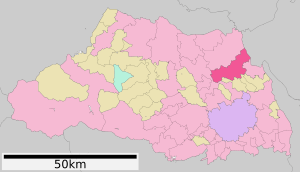 Kuki (久喜市, Kuki-shi) is a Japanese city in Saitama Prefecture on the island of Honshu.

Kuki City absorbed the town known as Shobu on 23 March 2010. Kuki City is formed by the Minami Saitama District and includes the towns of Kurihashi and Washiyama, both from the Kitakatsushika District. Kuki City is known for agriculture including rice, soba, plants and flowers.

Kuki, Saitama is approximately 50 kilometers (31 mi) north of Tokyo. The total area is 82.40 km². There is a river called Tone in the northeast and a river called Moto-Arakawa in the southwest.

Kuki, Saitama consists of four districts, followed by the wards included in each district as follows:

Kuki, Saitama economy relies mostly on agriculture. This agriculture is mainly the cultivation of rice growing on the plateau in the low land. In addition, the cultivation of the strawberries is prosperous, too. The switch from growing rice to producing soba has reduced the acreage under cultivation policy, too and has become a special product recently.

Other than agriculture, Kuki, Saitama has also been known to have many various factories for mass-producing anything from small household items to car and mechanical parts. The industrial business is not as prosperous as their agricultural business, but is still growing as businesses have moved their factories and production outside of the bigger, major cities.

Mid May to Mid June

Being that Kuki, Saitama is set in more of a country, outdoor, nature setting. Spring is popular because of the blooming cherry blossoms, flowers and spring foliage. Fall is popular because of the beautiful color changes taking place as the leaves on the trees and plants change color from fall to autumn and begin to fall before winter season comes. Besides the beautiful cherry blossoms, flowers, trees and foliage of both seasons, you will love the feeling of having fewer people around as well as very few buildings around you, a feeling of freedom.

There is one other form of tourism in Kuki, Saitama that is as popular as other parts of Japan. That is visiting the various shrines in Kuki, Saitama to say your prayers to loved ones and family who have passed, ward off evil spirits, to wish for good luck in school, family, work and life in general. There is one shrine in particular that has gained fame over the years from Japanese and foreign tourists alike. This is the Washinomiya Shrine (formerly Washimiya Shrine). The oldest known record of this shrine can be found in the Azuma Kagami, which is the official historical record for the Kamakura Shogun. The Imperial family and even Shogun Tokugawa Ieyasu had once occupied and helped make this shrine famous. The Washinomiya Shrine also holds many folk-art and culture events, including the famous Saibara-Kagura Festival. The traditional dance was handed down through generations and has been designated as a national folk-art and culture asset. The shrine also houses several ancient relics which are on display all the time for the public to view. During the New Year season, the shrine receives over 100,000 visitors.

Kuki has a famous festival that runs from July 12th - July 18th. Seven floats are paid out from 7 towns and each one is decorated as a doll of the person who took a subject out of myths with too many things on a festival car and it is pulled a town and is turned in the daytime. It changes quickly to the lantern festival car which a doll is removed, and displayed 500 lanterns on the all sides of the festival car at night. This lantern festival car becomes the biggest highlight as an event to color summer night. Expand for the musical accompaniment of the lively flute and gong, drum, and a youth in the town block turns a festival car said to be Seki Toichi, and the state to go round in the city is right the best part.

Kuki, Saitama has an International Exchange program with sister cities Esk, Queensland, in Australia, and Roseburg, Oregon, in the United States.

All content from Kiddle encyclopedia articles (including the article images and facts) can be freely used under Attribution-ShareAlike license, unless stated otherwise. Cite this article:
Kuki, Saitama Facts for Kids. Kiddle Encyclopedia.