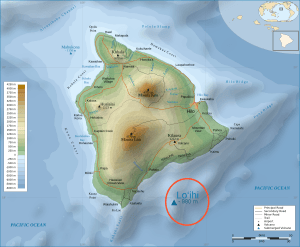 Lō'ihi Seamount, also known as Loihi or Lōʻihi, is an submarine volcano (seamount) in the Hawaiian–Emperor seamount chain. It lies in the Pacific Ocean south of the island of Hawaii.

Lōʻihi is an active volcano.

In 1995, the United States Board on Geographic Names (BGN) changed a longtime policy and is now using the Hawaiian ʻokina and kahakō in the Geographic Names Information System (GNIS). After 1995, Loihi seamount was officially identified as Lōʻihi.

Lōʻihi seamount is 32 miles from the peak of Mauna Loa. This small volcano is in on the slopes of the larger and older one. Lōʻihi Seamount is over 3,000 metres above the sea floor. It is as tall as the volcano Mount St Helens was before it erupted.

In 2012, the top of this volcano is one kilometre below the sea,

Lōʻihi is predicted to grow until it is an island, thousands of years from now.

All content from Kiddle encyclopedia articles (including the article images and facts) can be freely used under Attribution-ShareAlike license, unless stated otherwise. Cite this article:
Lō'ihi Seamount Facts for Kids. Kiddle Encyclopedia.