LaVilla is a historic African American neighborhood of Jacksonville, Florida and a was formerly an independent city. It developed after the American Civil War and was eventually annexed to the city of Jacksonville in 1887 and is now considered part of downtown.

It was struck by the Great Fire of 1901. During its height, the area was referred to as Harlem of the South and considered "the mecca for African American culture and heritage" in Florida, particularly its northern sections. It remains primarily an African-American neighborhood. The Ritz Theatre, Richmond Hotel, and the Clara White Mission are among the historic buildings in the area. Several are listed on the National Register of Historic Places. The area became a transportation hub with rail service developed by Henry Flagler and was also a cigar making center that included Greek and Syrian immigrants.

John Jones, an Anglo-American colonist, received a Spanish land grant for much of this area in 1801, when this part of Florida was still Spanish territory.

The town developed as a suburb to Jacksonville. At different points in the American Civil War, when Jacksonville and northeastern Florida were under Union control, the area was the site of a large Union garrison. Many slaves sought refuge with Union troops and, under the Emancipation Proclamation of 1863, gained freedom. After the war, the town attracted additional freedmen, some of whom left rural areas, and was incorporated as LaVilla. The population was mostly black, and during the Reconstruction era (United States), many blacks were elected to positions in Lavilla's government, including mayor and councilmen. In 1887 LaVilla and five other suburbs, including Riverside and Springfield, were annexed by the City of Jacksonville. It became a neighborhood of the city. In 1902 the state legislature passed a new constitution, adopting barriers to voter registration and voting that resulted in the deliberate disfranchisement of African Americans and excluding them from politics.

The part of LaVilla north of Adams Street was for many years a center of African-American life and culture in Jacksonville. The southern part of the neighborhood was developed as a major railroad hub in the late 19th century; several rail lines met at Union Station (now adapted for use as the Prime F. Osborn III Convention Center).

Lavilla was the site of the Great Fire of 1901, which spread and destroyed most of downtown, but the neighborhood was largely spared. In the first half of the 20th century, the neighborhood was an important center of African-American culture. A vibrant music and entertainment scene emerged, attracting many nationally renowned jazz artists to play at local black clubs on and off Ashely Street. Such clubs were segregated under the state laws that imposed Jim Crow. In 1929 the Ritz Theatre opened, becoming an important stop on what was called the Chitlin' Circuit for black entertainers. It became LaVilla's primary performance venue.

Corner of Duval and Broad Street, atop historic Masonic Temple, circa 1921

The vibrancy of the area on Ashley Street west of Broad Street, to and including Davis Street, led to its being called the "Harlem of the South". Landmarks included Nick’s Pool Parlor (the Strand), the Frolic and the Roosevelt theaters for a diversion. The Wynn/Egmont Hotel was known to provide the best accommodations for touring performers; the Boston Chop House, Mama’s Restaurant and Hayes Luncheonette served good food; the Lenape Bar and Manuel's Taproom were the favorite watering holes. The Ritz Theatre and The Knights of Pythias Hall hosted numerous famous performers.

After the 1960s, the neighborhood entered a period of precipitous decline. The railroad industry restructured, leading to a massive loss of jobs here and across the country. In addition, the construction of I-95 disrupted and divided the neighborhood. With the end of legal segregation following civil rights legislation in the mid-1960s, many residents left the area to pursue newer housing and work opportunities elsewhere.

The 1993 River City Renaissance plan crafted by Mayor Ed Austin allocated millions of dollars to renovating and developing LaVilla. Dilapidated buildings were torn down and significant historical structures, such as the Ritz Theatre, were restored or reconstructed, often in public-private partnerships. The Ritz also serves as the LaVilla Heritage tourism has been emphasized. 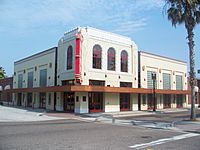 Venues, such as the Ritz Theatre, showcased black entertainers and catered to black audiences. The theatre still host shows and also offers visitors a look at black history.

The Jacksonville branch of the Federal Reserve Bank of Atlanta is located on Water Street at the southern bounds of LaVilla.

The southern part of the neighborhood was once a major railroad hub, with several rail lines meeting at Union Station (now the Prime F. Osborn III Convention Center).

LaVilla School of the Arts is a popular magnet middle school in Duval County that follows in the performance and art traditions of the Ritz/LaVilla area. Ritz Voices is a 100-member youth choir in the area.

The Clara White Mission is also located in LaVilla.

All content from Kiddle encyclopedia articles (including the article images and facts) can be freely used under Attribution-ShareAlike license, unless stated otherwise. Cite this article:
LaVilla Facts for Kids. Kiddle Encyclopedia.