Located in the Jacksonville neighborhood of LaVilla, the Prime Osborn contains two exhibition halls totaling 78,500 square feet (7,290 m2), several ballrooms and meetings rooms. The City of Jacksonville is looking to replace the Prime Osborn within the next decade, with a larger 500,000+ square foot convention center in downtown Jacksonville. The JTA Skyway's Convention Center station is located across the street. 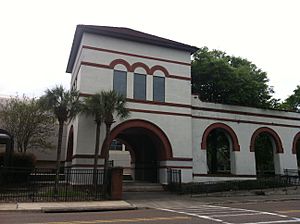 Last remaining segment of the original Union Depot, which opened in 1895

The company was incorporated in 1894 by Henry Flagler, who owned the Florida East Coast Railway. Its first Union Depot opened on February 4, 1895, and was completed on January 15, 1897. It came to be known as the Flagler Depot. Ownership was split between five railroad companies, Atlantic Coast Line Railroad, Florida East Coast Railway, and Seaboard Air Line Railway each with 25% ownership, Southern Railway and Georgia Southern and Florida Railway each with 12.5% ownership. 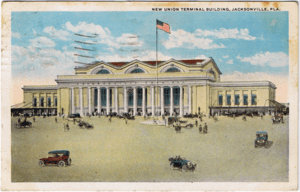 When the second Union Station opened in 1919 (on the site of the original one), it was the largest railroad station in the South. At its peak, the terminal handled as many as 142 trains and 20,000 passengers a day. Some of the passenger trains handled in Jacksonville were 18 to 22 railcars long. Within the terminal, there was a restaurant, snack bars, news stands, a barber shop, florist, a drug store, and gift shops. The Jacksonville terminal had 32 tracks. 29 of those tracks were passenger tracks with platforms. Of those, 1-15 were stub or "head" tracks, which ended at the bumper posts. (Some of these massive decorative concrete posts still stand within the Convention Center Concourse).

The station was last used on January 3, 1974; Amtrak moved to a new smaller station on the Northside. In 1982, a public-private partnership was started, led by former CSX chairman Prime F. Osborn III. The new convention center opened on October 17, 1986.

Brightline is a inter-city passenger rail system between Miami, FL and West Palm Beach, FL with an under-construction extension to Orlando, FL. Jacksonville is a likely expansion point for the near future, as the FEC Railway already owns the tracks running there.

All content from Kiddle encyclopedia articles (including the article images and facts) can be freely used under Attribution-ShareAlike license, unless stated otherwise. Cite this article:
Prime F. Osborn III Convention Center Facts for Kids. Kiddle Encyclopedia.