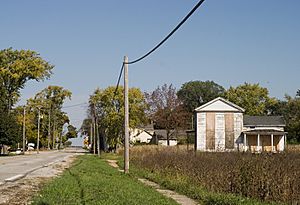 La Fox is an unincorporated community in Blackberry Township, Kane County, Illinois, United States. The community is located four miles west of Geneva and five miles east of Elburn. It serves as a station on Metra's Union Pacific/West Line.

La Fox was established circa 1859 on the Chicago and North Western Transportation Company, which was built through the area in 1854. The community was first named "Kane Station", but was renamed "La Fox" when the post office in present-day Geneva was moved to present-day La Fox.

All content from Kiddle encyclopedia articles (including the article images and facts) can be freely used under Attribution-ShareAlike license, unless stated otherwise. Cite this article:
La Fox, Illinois Facts for Kids. Kiddle Encyclopedia.