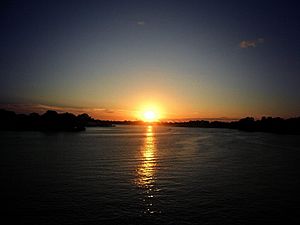 Sunset on the Lafayette River

The small river was initially known as Tanner's Creek. At the time of the arrival of the English colonists in 1607, the area around the creek was inhabited by the Chesepians, a group of eastern-Algonquian speaking Native Americans (American Indian) affiliated with the Powhatan Confederacy. The main village of the Chesepians was called Skicoak, believed to have been located along Tanner's Creek.

As the British Colony of Virginia expanded, the Native Americans were overwhelmed, initially moving further inland. In 1634, the original eight shires of Virginia (counties) were formed, and the area of Tanner's Creek was designated as within Elizabeth River Shire. (Despite popular misconception that the namings were related Queen Elizabeth I, both Elizabeth River Shire and the Elizabeth River were named to honor Princess Elizabeth Stuart, the daughter of King James I of England. She was the sister of the ill-fated Prince Henry and his younger brother Prince Charles, who later ascended to the throne as King Charles I). The naming of Tanner's Creek and Tanner's Point at its confluence with the Elizabeth River each derived from one of the early settler's and adjacent landowners, Daniel Tanner. 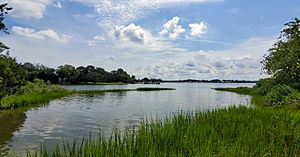 The areas drained by Tanner's Creek became part of a subdivided area of the original shire in 1691 known as Norfolk County. Eventually, after a series of annexations by the growing and expanding commerce center of the independent city of Norfolk to the south, all of the waterway became located within the corporate limits. (The remaining portion of Norfolk County not previously annexed by the growing cities of Norfolk, Portsmouth and tiny South Norfolk were consolidated with South Norfolk to form the new independent city of Chesapeake in 1963).

All content from Kiddle encyclopedia articles (including the article images and facts) can be freely used under Attribution-ShareAlike license, unless stated otherwise. Cite this article:
Lafayette River Facts for Kids. Kiddle Encyclopedia.