The Village of Lake George is a village within the town of Lake George in Warren County, New York, United States, located at the southern end of its namesake lake. The population was 985 at the 2000 census. It is part of the Glens Falls Metropolitan Statistical Area. The village and the surrounding area is a famous summertime tourist region and historic summer colony, which at one time included Alfred Stieglitz and Georgia O'Keeffe.

The village of Lake George was originally known as Caldwell, a name preserved in the Caldwell Presbyterian Church. Located on the southern end of Lake George within the eastern edge of the Adirondack Park, the village and surrounding area were on the route between the British and French colonies, and were often traversed by military forces during the Colonial wars. A reconstruction of Fort William Henry, which replaces the original burned during the French and Indian War, is within the village and serves as a living museum.

In the last quarter of the 19th century the area began to become an important tourist destination. Railroad tracks ran onto the steamboat docks on the south end of Lake George. From there steamboats ran several times a day to the hotels further north on the lake. The Lake George Steamboat Company continues to operate steamboats out of Lake George. 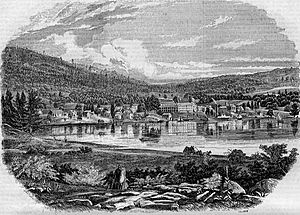 Village of Lake George in 1854

The Village of Lake George was incorporated in 1903. Besides the fort with its many associations, historic points of interest include the defunct railway station and a 19th-century courthouse and jail, now operated as a museum by the local historical society. The beach at one motel in the village features a plaque marking the site where the Marquis de Montcalm landed with his army preparatory to attacking the fort. A plaque at the site of the Bloody Pond Massacre is a short distance south of the village along US 9.

According to the United States Census Bureau, the village has a total area of 0.6 square miles (1.6 km2), all land. It is situated beside Lake George. The village is located about 50 miles (80 km) north of Albany, New York and about 200 miles (322 km) north of New York City and northwest of Boston, Massachusetts. 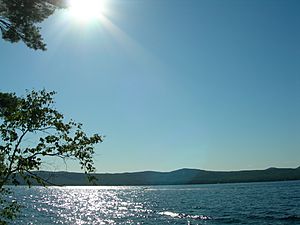 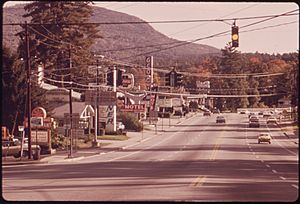 There were 448 households out of which 26.6% had children under the age of 18 living with them, 37.5% were married couples living together, 10.9% had a female householder with no husband present, and 46.9% were non-families. 36.6% of all households were made up of individuals and 10.7% had someone living alone who was 65 years of age or older. The average household size was 2.19 and the average family size was 2.90.

All content from Kiddle encyclopedia articles (including the article images and facts) can be freely used under Attribution-ShareAlike license, unless stated otherwise. Cite this article:
Lake George (village), New York Facts for Kids. Kiddle Encyclopedia.