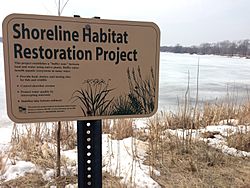 Lake Hiawatha from the playground on its eastern shore.

Lake Hiawatha is located just north of Lake Nokomis in Minneapolis, Minnesota. It was purchased by the Minneapolis Park and Recreation Board in 1922 for $550,000. At that time the lake was a marsh known as Rice Lake, but over four years, the park system transformed the wetland into a lake surrounded by a park.

The lake and park have a fishing dock, wading pool, tennis courts, and softball diamonds. There is a recreation center that hosts activities. The lake borders a municipal golf course. In winter the golf course has groomed cross country ski trails and the park has ice and hockey rinks. A 0.68-mile (1.09 km) shared-use path runs alongside the east side of the lake from East 43rd Street to Minnehaha Parkway where it connects to the Grand Rounds trail system and destinations such as Lake Nokomis, Minnehaha Creek, and Minnehaha Falls. Lake Hiawatha is one of the few lakes through which Minnehaha Creek flows, and the last one before it reaches Minnehaha Falls and then the Mississippi River.

Friends of Lake Hiawatha is a community environmental action group that organizes volunteer efforts to clean the lake and park.

Lake Hiawatha has much more garbage than any other Minneapolis lake. The lake is a stormwater outlet for the Corcoran, Central, Bryant, and Northrop neighborhoods, as well as the park's golf course. The Lake Hiawatha beach has been occasionally closed, such as in August 2014, because of unsafe levels of E. coli. Lake Hiawatha has been officially declared infested by zebra mussels since 2010, and in September 2013 park workers began finding mussels.

The Rice Lake marsh was dredged to a depth of 33 feet, and the dredged soil was placed on the west side, to form the rolling landscape where the golf course was built. The golf clubhouse was constructed in 1932, and the golf course was opened in July, 1934 (first 9 holes only, the full 18-hole course opened the next summer). It was quickly heavily used by Minneapolis residents. (For many years, it was the only one of the Minneapolis Park Board golf courses that operated at a profit.) The dredged soil tended to compact and sink, requiring repairs to the early course, and a 1939 work relief project added shore retaining walls to prevent erosion, since the dredged shoreline was especially susceptible to erosion from waves.

The course was frequently used by metro-area African-American golfers, who were not welcomed at other golf courses at that time. It was the home course for the Old Negro Golf League, and hosted the Upper Midwest Bronze Golf Tournament for over 25 years. Many black golfers remember visits to this course with their fathers, and learning on the driving range, and say the course has historical significance for black golfers. “This is the only course that allowed black people to play 60 years ago." said South High assistant golf coach Charles Rodgers.

All content from Kiddle encyclopedia articles (including the article images and facts) can be freely used under Attribution-ShareAlike license, unless stated otherwise. Cite this article:
Lake Hiawatha Facts for Kids. Kiddle Encyclopedia.