Lake Lafayette is a prairie lake located in the coastal lowland in eastern Tallahassee, Leon County, Florida with US 27 / State Road 20 running close on its south side.

Originally known as Prairie Lake, Lake Lafayette is the remnant of a Pleistocene river delta. Water levels receded in the last Ice Age and the coast moved farther south of the site which became a river valley and eventual a tributary of the St. Marks River. Dissolution processes culminated in the formation of a large basin, 8,925 acres (36.12 km2), a major sinkhole is located in Upper Lake Lafayette just South of the Cody Scarp.

The Lake Lafayette Basin is considered to be one of the premier paleoarchaelological sites in Florida. The lake area is surrounded by archaeological sites. A large number of Native American mounds surround the lake; one excavated mound is currently displayed at the Florida Museum of Natural History. The large middens on Lake Piney Z, and the Temple Mounds at Fallschase, are of particular interest. Native American settlements are common in the Lafayette Basin and Hernando de Soto spent the first Christmas in the New World at one of these sites.

The early settlers of Leon County called Lake Lafayette 'Prairie Lake' as it looked much like a prairie during droughts. The lake took its name from the Lafayette land grant, the township (36-square-mile tract) on the north and east side of Tallahassee that was granted by the US Congress in 1824 to General Lafayette in gratitude for his military services in the American Revolutionary War.

In the late 1820s, portions of the Lafayette grant around the lake were sold and became plantations, each a few thousand acres in size. The Francis Eppes Plantation, Evergreen Hills Plantation and the Joseph Chaires Plantation grew cotton until the 1860s. 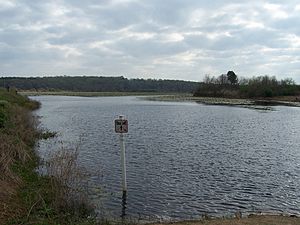 Of the four major lake basins in Leon County - Lake Jackson, Lake Iamonia, Lake Miccosukee, and Lake Lafayette - the Lake Lafayette basin is the most intensively developed; it is also considered the most modified lake basin in all of northern Florida, since it is no longer functioning in a natural fashion due to human effects. Lafayette Basin once functioned as a temporary lake, much like Lake Miccosukee and Lake Iamonia where water was frequently exchanged between the Lake Basin, the Floridan Aquifer (sink holes) and the St. Marks River through a series of connecting sloughs.

Lower lake Lafayette is covered with floating islands of aquatic vegetation, called Tussocks, usually the root systems of decaying Fragrant Water Lily, an invasive species. These are colonized by aquatic grasses, sedges and even small trees which float around the lake driven by the winds. They can trap or crush boats, docks and piers. 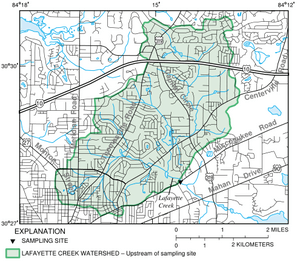 Lake Lafayette is fed by Lafayette Creek, draining a significant portion of northeastern Tallahassee; it has a drainage basin of approximately 10 sq mi (26 km2). The creek flows into a small reservoir upstream from Lake Lafeyette, impounded by a weir at the Weems Road bridge, then continues into Upper Lake Lafayette. Lower Lake Lafayette formerly flowed into the St. Marks River underground, and in sheet flow after heavy rains; it currently is connected to the river by a canal.

All content from Kiddle encyclopedia articles (including the article images and facts) can be freely used under Attribution-ShareAlike license, unless stated otherwise. Cite this article:
Lake Lafayette Facts for Kids. Kiddle Encyclopedia.