Lac (Lake) Ouareau is a fairly large lake located near the town of Saint-Donat, in Matawinie Regional County Municipality, Quebec, in administrative region of Lanaudière, in the province of Quebec, Canada.

It is approximately 100 minutes by car north of downtown Montreal in the Laurentian Highlands and is located on the outskirts of Saint-Donat. Celine Dion currently owns a summer house on Lac Ouareau.

Today, Archambault and Ouareau lakes receive thousands of vacationers who enjoy the many outdoor activities available in the region. 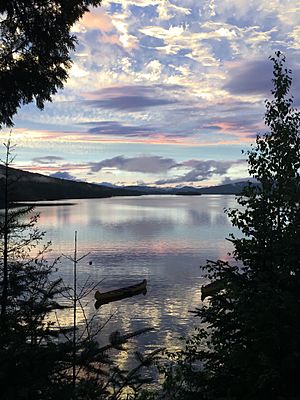 Summer sunset over Lac Ouareau, taken from the "Magic View" at Camp Ouareau

Lake Ouareau includes the Baie de la Dame which sinks 3.6 kilometres (2.2 mi) on the north shore to the mouth of the lake. The entrance to the bay is 1.3 kilometres (0.81 mi) wide. The lake also includes Leguerrier Bay (length: 1.9 kilometres (1.2 mi); width at its entrance: 0.76 kilometres (0.47 mi)), located southeast of the lake. The Saint-Loup creek pours there at the bottom of the bay. The two main islands are: Cave Island (located near the southwest shore) and Rupert Island (located in the western area).

The lake is home to many ideal freshwater sport fish such as largemouth bass, yellow perch, smallmouth bass, and, in some areas, muskellunge. The lake is also home to many microorganisms that have been known to thrive in very clean, or "nutritious" Northern lakes. The temperature of the water is 55 to 78 degrees Fahrenheit in the summer.

Youth camps around the lake 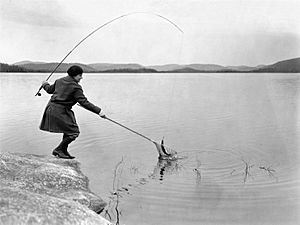 A fisherwoman and her catch at Lac Ouareau, 1925

An all-girls camp is located on the borders of Leguerrier Bay of lake Ouareau, hence its name, "Camp Ouareau". Camp Ouareau was established in 1922 by two women: Mabel C. Jamieson and Ferna G. Halliday. They jointly ran the camp in 1922 and 1923. Since 1924, Jamieson remained at Ouareau camp and Halliday went on to be a founder of Oconto camp, an all-girls camp, located since 1924 in Tichborne, in Ontario.

Originally an English camp, the director at the time decided in 1976 to start accepting 50% francophone campers. Each individual age group has 50% anglophone & 50% francophone enrolment in order to ensure an exchange of the language & cultures while experiencing the different areas of camp life: activities, dining room, in cabins/tents, etc.

The concept of student village has officially existed since 1944. Nevertheless, the site of the Student Village of Lake Ouareau was established in 1948 on land acquired from Dr. Albert Guilbault, by the J.E.C. (Jeunesse Étudiante Catholique) on the southwest shore of Lac Ouareau. The latter donated land adjacent to the camp in the summer of 1948 to build a chapel. The J.E.C. at the time, it was funding holiday study camps for young girls at this camp on Lac Ouareau and at the camp on Île aux Noix, on the Richelieu river, for young boys. The accommodation capacity of the Ouareau camp was 130 young people. According to the historical press review, the last mention of this Student Village was in September 1955. In 1956, this camp became the La Cordée Youth Center, administered by the "Ordre du Bon Temps" (Order of Good Times) which had been founded in 1946 with the aim of to promote the organization of popular leisure activities. This group organized an annual ten-day camp-school in July (in particular at the Student Village of Lac Ouareau in 1953), for young recreational leaders looking for techniques and training. At the time, as a complement, the La Cordée Youth Center operated a youth hostel in Val-Morin in winter and offered winter sports activities The historic press does not indicate any other mention of this Youth Center after February 1957.

Created in 1957 by the Sisters of Charity of Sainte-Marie, this summer camp for boys and girls covers 115 acres and can now accommodate up to 210 young people per week. The entrance to the site is located 1.1 kilometres (0.68 mi) west of Lake Ouareau, at 959 Principale Street in Saint-Donat-de-Montcalm. 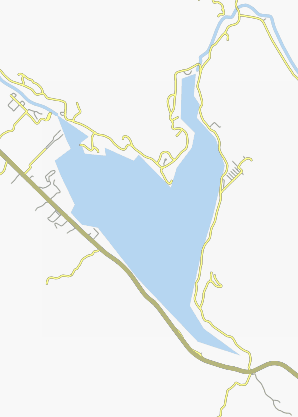 The term "Ouareau" is of Algonquin origin meaning far or distant. This term is part of the toponym of the river and its head lake. The term Ouareau has been known since the end of the 18th century. This term appears on the plan of the surveyor William Rankins (1789) under the spelling: "The river Lac Ouareau". Joseph Bouchette also mentions this term in his Topographic Description of the Province of Lower Canada (1815). The toponym "Lake Ouareau" is also noted on the map of Francis P. Quinn, drawn up in 1858. The lake and the Ouareau river were used to transport logs by floating at the turn in the second half of the 19th and the first half from the 20th century.

The toponym Lac Ouareau was formalized on December 5, 1968.

All content from Kiddle encyclopedia articles (including the article images and facts) can be freely used under Attribution-ShareAlike license, unless stated otherwise. Cite this article:
Lake Ouareau Facts for Kids. Kiddle Encyclopedia.