She was born in the town of Charlemagne, Quebec, Canada. She is the youngest of 14 children. When she was 12 years old, her brother sent a recording to a manager named René Angélil. With his help, she released her first album in 1981, and her first English album in 1990. She used to live in Las Vegas, Nevada. She now lives in Jupiter, Florida. In 2007, she performed a show with Elvis Presley, which was arranged on the computer with old images from Elvis shows. It had been arranged for the TV show American Idol.

Dion first had international recognition in the 1980s. She won both the 1982 Yamaha World Popular Song Festival and the 1988 Eurovision Song Contest where she represented Switzerland.

She has sold the most albums in the world for a female artist. For that, she received a special World Music Award in 2004. She has also sold the most French albums with 7 million copies. Dion is the best-selling Canadian artist of all time. 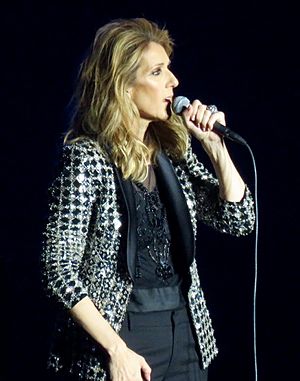 All content from Kiddle encyclopedia articles (including the article images and facts) can be freely used under Attribution-ShareAlike license, unless stated otherwise. Cite this article:
Céline Dion Facts for Kids. Kiddle Encyclopedia.