Lamarckism (also called Lamarckian evolution) is a hypothesis regarding evolution. Evolution tries to explain how species change over time. Today, the only widely accepted theory of evolution is that developed from the ideas of Charles Darwin.

Lamarckism was developed by Jean-Baptiste de Lamarck. He based his ideas, to some extent, on those of Erasmus Darwin, the grandfather of Charles Darwin. Lamarckism says that individuals do not only pass on the things they received from their parents, but also some things they experienced during their lifetime. As an example, he cited giraffes. Giraffes, which have long necks, must have evolved from ancestors with much shorter necks. His idea was that adults needed to stretch their neck to reach leaves from high branches. Therefore, he thought, the children inherited longer necks. This idea is called the inheritance of acquired characteristics.

Although Darwin did not entirely break with these ideas, his characteristic idea of natural selection relates to the individuals's relative survival and success in reproduction. Better adapted forms leave, on average, more offspring. This changes the proportion of alleles in the population.

Gregor Mendel discovered some basic rules of heredity. These rules of Mendelian inheritance contradict Lamarck's hypotheses entirely, but are consistent with natural selection. This explains why Lamarck's ideas are no longer regarded as a sound explanation of evolution. Where Lamarck and Darwin do agree is that evolution did take place. 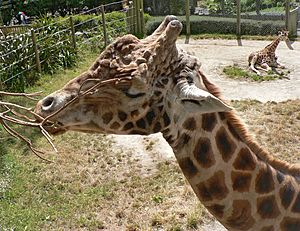 The evolution of a giraffe's neck is often used as the example in explanations of Lamarckism.

The identification of "Lamarckism" with the inheritance of acquired characteristics alone is regarded by some as an over-simplification, rehashed in textbooks repeatedly. Stephen Jay Gould wrote that late 19th century evolutionists "re-read Lamarck, cast aside the guts of it... and elevated one aspect of the mechanics – inheritance of acquired characters – to a central focus it never had for Lamarck himself". He argued that "the restriction of Lamarckism to this relatively small and non-distinctive corner of Lamarck's thought must be labelled as more than a misnomer, and truly a discredit to the memory of a man and his much more comprehensive system". Gould advocated defining "Lamarckism" more broadly, in line with Lamarck's overall evolutionary theory.

However, as scientist historians such as Michael Ghiselin and Stephen Jay Gould have pointed out, none of these views were original to Lamarck. On the contrary, Lamarck's contribution was a systematic theoretical framework for understanding evolution. He saw evolution as comprising two processes;

The modern point of view is that neither of his two 'forces' exists; Lamarck can be credited with the first fully worked-out account of evolution. However, his ideas of how it came about are entirely mistaken.

All content from Kiddle encyclopedia articles (including the article images and facts) can be freely used under Attribution-ShareAlike license, unless stated otherwise. Cite this article:
Lamarckism Facts for Kids. Kiddle Encyclopedia.