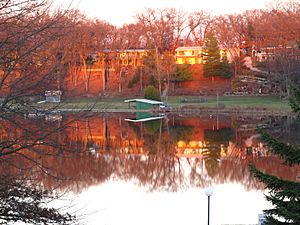 Most of the lake bottom is composed of marl; the deeper parts are mostly composed of pulpy peat.

Located both to the northwest and southeast of the lake in two parcels sits the 24 acre Lamberton Lake Fen Nature Preserve, managed by the Land Conservancy of West Michigan. Established in 1994, it was expanded ten years later. Lamberton Creek flows from the lake through the preserve's southeast parcel, where the fen is located. The fen is home to many native plant and animal species.

The wetlands around the lake were more extensive in the past. However, already by 1901 much of this area had been reclaimed. This was due to a lower lake level caused by the deepening of the creek.

In the late nineteenth century Lamberton Lake with Lamberton Creek was under consideration as one of several possible sources for the water supply of the growing city of Grand Rapids.

All content from Kiddle encyclopedia articles (including the article images and facts) can be freely used under Attribution-ShareAlike license, unless stated otherwise. Cite this article:
Lamberton Lake Facts for Kids. Kiddle Encyclopedia.