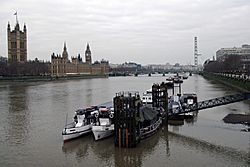 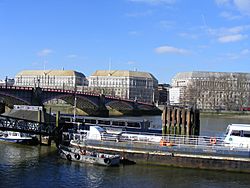 Lambeth Pier is a pier on the Albert Embankment, near Lambeth Bridge, on the south side of the Thames in London, England. It has been part of a ferry service up to the mid-18th century, and now serves pleasure rides and cruises along the river.

There has been a landing facility for boats here since Roman Britain. It became the primary crossing point between Lambeth Palace and Westminster Palace for the Archbishop of Canterbury. A horse ferry was in operation by 1513, as it was one of the few places along the Thames that accommodate such a service. It sank in 1633, and again in 1656 while carrying Oliver Cromwell's coach. Mary of Modena used the ferry to escape to France during the Glorious Revolution. The service closed following the opening of Westminster Bridge in 1750.

Since the closure of the ferry service, the pier has been used for leisure trips along the Thames. In the 19th century there were "constant stoppages" of steamboats at the pier. In 1961 Decca Radar's training school moved to the area from Blackfriars. In 1860, the pier was moved further out into the river following the construction of the Albert Embankment.

Capital Cruises were operating at Lambeth and Tower Piers by the 1980s. Today, Thames Cruises operate from the pier. Tidal Cruises has run pleasure services from Lambeth Pier since the 1980s.

All content from Kiddle encyclopedia articles (including the article images and facts) can be freely used under Attribution-ShareAlike license, unless stated otherwise. Cite this article:
Lambeth Pier Facts for Kids. Kiddle Encyclopedia.