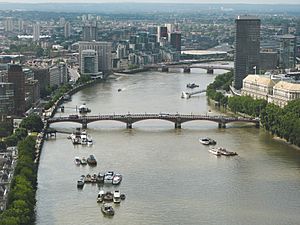 Lambeth Bridge with Vauxhall Bridge in the distance as seen from London Eye.

Lambeth Bridge is a road traffic and footbridge crossing the River Thames in an east-west direction in central London, England.

The river flows north at the crossing point. Downstream, the next bridge is Westminster Bridge. Upstream the next is Vauxhall Bridge.

The first crossing at this site was a suspension bridge which was built in 1862. The current bridge opened in 1932

In June 2012, the bridge was highlighted on the route of Queen Elizabeth II's Diamond Jubilee Pageant on the Thames.

All content from Kiddle encyclopedia articles (including the article images and facts) can be freely used under Attribution-ShareAlike license, unless stated otherwise. Cite this article:
Lambeth Bridge Facts for Kids. Kiddle Encyclopedia.