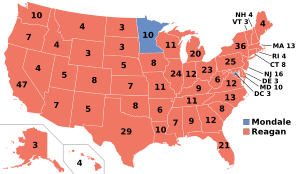 Here is an example of a landslide victory when 49 out of the 50 states gave the most votes to Ronald Reagan, 1984

A landslide victory is when one candidate or political party in an election receives a lot more votes or seats than their opponent.

An example of a landslide victory is when Ronald Reagan won the 1984 United States presidential election by winning 49 out of the 50 states. Other examples include when Tony Blair and his Labour Party won the United Kingdom general elections of 1997 and 2001 and when Andrés Manuel López Obrador won the presidency by nearly 13,000,000 votes in the 2018 Mexican general election.

All content from Kiddle encyclopedia articles (including the article images and facts) can be freely used under Attribution-ShareAlike license, unless stated otherwise. Cite this article:
Landslide victory Facts for Kids. Kiddle Encyclopedia.