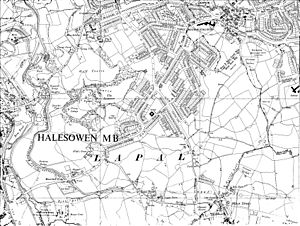 1955 Ordnance Survey map of the west portal of tunnel 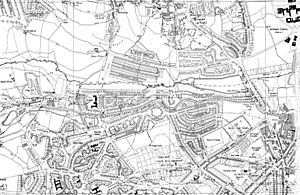 1955 Ordnance Survey map of the east portal of tunnel

The Lapal Tunnel (old spelling Lappal Tunnel) is a disused 3,795-yard (3,470 m) canal tunnel on the five mile dry section of the Dudley No. 2 Canal in the West Midlands, England. It takes its name from the settlement of Lapal.

The narrow brick-lined tunnel, built in 1798 by William Underhill, had no towpath. It had a very small bore — at 7 feet 9 inches, barely wider than the boats which used it, with a headroom of only 6 feet. Boats originally took about three hours to complete the passage by legging or poling, so in 1841 a steam engine was built at the Halesowen end which drove a scoop wheel to load the tunnel with water. Stop gates could be opened at either end to assist boats along the tunnel in either direction.

The tunnel suffered many collapses, and after a collapse in 1917 due to mining subsidence it was abandoned. It runs under Lapal, the M5 motorway near junction 3 and Woodgate Valley Country Park. The canal between Halesowen and Selly Oak is also disused and some sections have been filled in as the tunnel was considered uneconomic to repair. A short un-navigable length remains in the grounds the Leasowes, once a garden belonging to the poet William Shenstone (1714–1763), and now a public park and golf course.

To the north of Halesowen, the canal is in good repair and is used by boats accessing Hawne Basin. The canal north of Halesowen includes the Gosty Hill Tunnel which at 557 yards (509 m) is much shorter than the Lapal was, but it was built at the same time as the Lapal and has similar dimensions.

The Lapal Canal Trust is restoring the lost canal to make it navigable up to the tunnel from both the Halesowen and Selly Oak ends, and originally had a longer term aim of restoring the tunnel. In May 2007 the trust received recommendations from professional consultants, Atkins, that the tunnel should not be restored, but instead be replaced by a new up-and-over alignment using locks.

In February 2012 plans for the regeneration of the Selly Oak area were submitted to Birmingham City Council which included a navigable section of canal from a new junction with the Worcester and Birmingham Canal to the recently reconstructed Harborne Lane bridge.

All content from Kiddle encyclopedia articles (including the article images and facts) can be freely used under Attribution-ShareAlike license, unless stated otherwise. Cite this article:
Lapal Tunnel Facts for Kids. Kiddle Encyclopedia.