Boyle won a bronze medal with Helen Norfolk, Alison Fitch and Melissa Ingram in the 4 × 200 m freestyle relay at the 2006 Commonwealth Games.

At the 2008 Olympic Games she was a member of the New Zealand 4 × 200 m freestyle relay team which was disqualified in the heats.

She won a silver medal with Penelope Marshall, Amaka Gessler and Natasha Hind in the 4 × 200 m freestyle relay at the 2010 Commonwealth Games.

At the 2012 Olympics in London, Boyle was fourth fastest in the heats of the 400m freestyle in a New Zealand record 4:03.63. In the final she finished 8th. In the 800m heats she swam 8:25.91, also a New Zealand record, qualifying fifth fastest for the final. In the final she swam another record of 8:22.72 to finish fourth, 2.40 seconds from the bronze medal which went to defending champion and world record holder Rebecca Adlington. 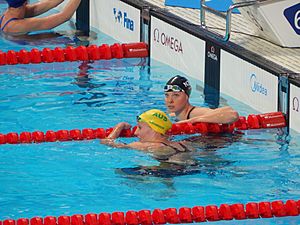 In August 2013, Boyle claimed three medals at the FINA World Swimming Championships in Barcelona, becoming only the second New Zealander to achieve this feat (after Danyon Loader in 1994).

At the Wellington Winter Short Course meet in August 2014 Boyle broke the World Short Course record in the women's 1500m freestyle with a time of 15:22.68.

Boyle is a graduate of the University of California, Berkeley. She announced her retirement from competitive swimming on the 1 August 2017 due to ongoing injury problems.

In the 2020 New Year Honours, Boyle was appointed a Member of the New Zealand Order of Merit, for services to swimming.

All content from Kiddle encyclopedia articles (including the article images and facts) can be freely used under Attribution-ShareAlike license, unless stated otherwise. Cite this article:
Lauren Boyle Facts for Kids. Kiddle Encyclopedia.