The Laurier-Cascade Border Crossing connects the town of Kettle Falls, Washington with Christina Lake, British Columbia on the Canada–US border. This crossing is the point at which the road signed as US Route 395 on the American side and British Columbia Highway 395 on the Canadian side, the Kettle River, the Canadian Pacific Railway, and the runway of the Avey Field State Airport all traverse the Canada–US border. The US and Canadian border inspection agencies inspect trains, motor vehicles and airplanes. 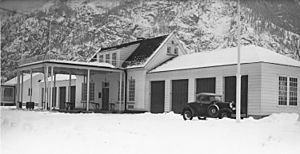 Canada has operated a border station at this crossing since 1897, when the prospecting boom was at its peak. In 1899, the Columbia and Western Railway laid tracks across the border. The mining boom ended soon after, and a series of fires (one of which destroyed 6 hotels in 1899 in the boomtown of Cascade City) hastened the departure of many. A large sawmill operated in Cascade just north of the border until the 1930s. Although the Laurier post office remains in operation, the town is gone. The Cascade post office closed in 1973, and the location where the center of town once stood is now a golf course.

The US built a border inspection station at Laurier in 1933, which remains in use today. It was listed on the US National Register of Historic Places in 2014. Canada replaced its 1950-era border station in 2007.

All content from Kiddle encyclopedia articles (including the article images and facts) can be freely used under Attribution-ShareAlike license, unless stated otherwise. Cite this article:
Laurier-Cascade Border Crossing Facts for Kids. Kiddle Encyclopedia.