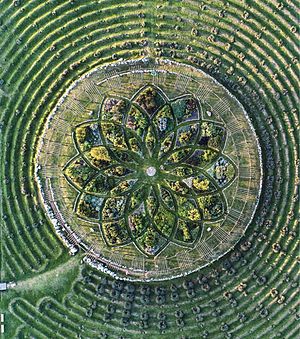 The Lavender Labyrinth is a 3-acre large garden that resides about 1.5 miles south of Silver Lake in Shelby, Michigan and minutes away from the shores of Lake Michigan. It is located at Cherry Point Farm & Market, which is owned by Barbara Bull. Cherry Point Farm, opened in 1961, is the oldest farm market in Oceana County. Additionally, the labyrinth is also large enough so that it can be seen aerially from space.

The Bull family has been operating the 600-acre farm since 1949, opening a fruit market shortly after its inception. Barbara Bull is the fourth generation of her family to be maintaining the land and the garden. As a young girl, she sold cherries and pies to the local people, jump-starting her path as a farming entrepreneur. When she was 50, she decided that the original farm could benefit from renovations. Renovation plans in 2001 included a new herb garden, greenhouses, a vineyard, a winery, and a renovated barn to act as a guest house. Bull worked with architect Conrad Heiderer, who described the renovations as a way of celebrating farm life. Heiderer is a local Michigan artist who is known for his landscape architecture that blends with nature. Bull is also a member of the Great Lakes Energy Cooperative.

The word labyrinth is derived from the Greek word labyrus, meaning a double-edged ax. It is also associated with “labra” and “labirion” which means cave or mine. The labyrinth was designed in 2001 by Bull and Heiderer. Bull wanted to build this garden to add meaningful attraction to make the farm more than a farm market to those visiting. The asymmetrical labyrinth integrates elements of time within its structure, having one stone at the center representing the year, 12 interlocking circles representing the months in a year, 52 vertical posts on the arbor representing the weeks, and 7 cross pieces representing the days of the week. The geometry of the labyrinth draws from concepts of sacred geometry. Geometry is thought to be sacred because irrational numbers can be derived from nature, and subtle aspects of ratio and patterns are omnipresent. Therefore, the harmony of proportion between nature and numbers are sometimes believed to be able to result in “universal order." “Geometric principles provide an extension from the harmonious, natural order of the universe to the architectural artifact." Specifically, the circles are seen to represent the manifestation of creation, due to its quality of having no beginning and no end. The flower-shaped design has allusions to the flower of life, which has interlocking circles surrounding one in the center; instead, Lavender Labyrinth has 12, double the amount of outer circles. The labyrinth designed by Heiderer is considered to be a contemporary design.

The path to the stone circle center, which is the herb garden, is surrounded by a rock wall, earthy grounds, and plants--primarily lavender. It takes about an hour to reach the center of the labyrinth. The herb garden is filled with 150 types of herbs.

The lavender surrounding the labyrinth is planted in the spring, and it reaches its full bloom in mid-July through late-July. Then, the lavender is collected and dried in late fall and then sold in markets. Lavender was specifically chosen because of its aromatherapy effects; it has been documented to include mood and emotional control. It is also at the center of studies that aim to show the relationship between lavender aromatherapy and medical issues, such as coronary circulation.

All content from Kiddle encyclopedia articles (including the article images and facts) can be freely used under Attribution-ShareAlike license, unless stated otherwise. Cite this article:
Lavender Labyrinth Facts for Kids. Kiddle Encyclopedia.