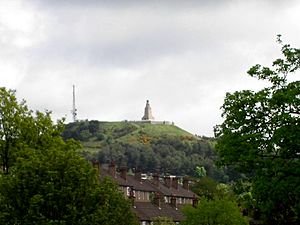 The Law is an area located in the centre of Dundee, Scotland. Its predominant feature is an extinct volcano which gives it its name.

The Dundee Law, which may take its name from the Gaelic word for mound or more likely, from Anglo-Saxon hlāw (modern Scots law) meaning a (grave-)mound, is the plug of an extinct volcano. Actions by subsequent ice movements further eroded the hill and deposited more debris around the base creating a crag and tail. The shallow gradient of the slopes on the north and eastern sides of the law suggest a north easterly movement of ice flows. The hill's summit is over 500 feet above sea level. Despite the derivation of "Law" suggesting it would be tautological to do so, the Law is commonly referred to as the "Law Hill", including by Dundee Council itself. 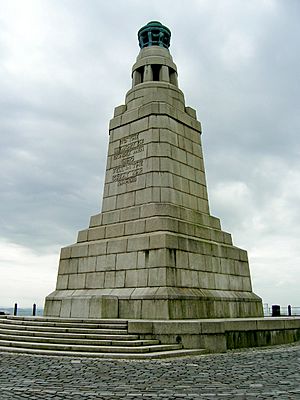 Archaeological evidence of burials suggest that the law may have been used by human settlers 3500 years ago. During the Iron Age it was the site of a Pictish settlement. Roman pottery has been found on the law, suggesting that the Romans may have used it as a lookout post in the first century. The Law played host to an important event in 1689. On 13 April 1689 Viscount Dundee raised the Stuart Royal Standard on the Law, which marked the beginning of the first Jacobite rising.

The Law has a tunnel which runs through it. Closed in the 1980s, it used to be used for the railway to Newtyle. In 2014 a campaign was started to reopen it as a tourist attraction.

A war memorial to the fallen in both world wars was constructed atop the summit which was first unveiled on May 16, 1925. In the years 1992 to 1994 the facilities on the summit of the Law were upgraded by Dundee District Council and Scottish Enterprise Tayside with additional funding from the European Commission's regional development fund. The memorial is lit with a large flame at its top on a number of significant days, viz: 25 September (in memory of the Battle of Loos, in which many members of the local Black Watch regiment lost their lives), 24 October (United Nations Day), 11 November (Armistice Day) and Remembrance Sunday

All content from Kiddle encyclopedia articles (including the article images and facts) can be freely used under Attribution-ShareAlike license, unless stated otherwise. Cite this article:
Law, Dundee Facts for Kids. Kiddle Encyclopedia.