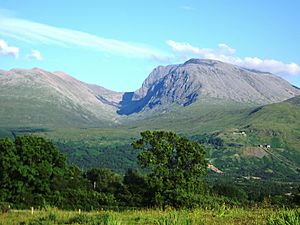 Ben Nevis, the highest mountain in the British Isles

The mountains and hills of Great Britain, and to a lesser extent Ireland, are the subject of a considerable number of lists that categorise them by height, topographic prominence, or other criteria. They are commonly used as a basis for peak bagging, whereby hillwalkers attempt to reach all the summits on a given list. The oldest and best known of these lists is that of the Munros, mountains in Scotland over 3,000 feet (914 m); other well-known lists include the Corbetts, Wainwrights and Marilyns.

There is no worldwide consensus on the definition of "mountain", but in Great Britain and Ireland it is often taken to be any summit at least 2,000 feet (or 610 metres) high. The UK government defines mountain as land over 600 metres for the purposes of freedom of access. In addition, some definitions also include a topographical prominence requirement, typically 100 or 500 feet (30 or 152 m). In practice, mountains in Scotland are frequently referred to as "hills" no matter what their height, as reflected in names such as the Cuillin Hills and the Torridon Hills. In Wales, the distinction is more a term of land use and appearance which has nothing to do with height. 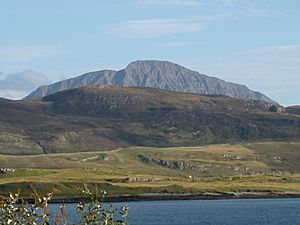 The Munros are mountains in Scotland over 3,000 ft (910 m). The list was originally compiled by Sir Hugh Munro in 1891, and is modified from time to time by the Scottish Mountaineering Club (SMC). Unlike most other lists, the Munros do not depend on a rigid prominence criterion for entry; instead, those that satisfy the subjective measure of being a "separate mountain" are regarded as Munros, while subsidiary summits are given the status of tops. There are 282 Munros and 227 further tops, all of them in the Scottish Highlands. 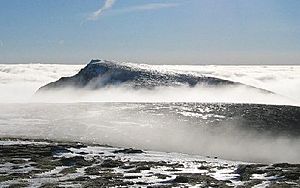 Aonach Beag, one of the "mini" Murdos

The Murdos are an attempt to apply objective criteria to the Munros and their associated tops. They comprise all the summits in Scotland over 3,000 feet (914.4 m) with a prominence of at least 30 metres (98 ft). There are currently 442 Murdos, compared to 282 Munros or 509 Munros plus tops. The list was compiled by Alan Dawson.

All Murdos are also Munro Tops, but many Munro Tops fail to qualify as Murdos because of insufficient relative height. Before 1997 there were seven Murdos that were not Munro Tops, some with quite substantial relative heights. All seven were included in the 1997 edition of Munro's Tables, plus two non-Murdos: Little Pap on Lochnagar and Knight's Peak on Sgurr nan Gillean (deleted in September 2013 after surveying showed it to be below 3000 feet. Little Pap has an estimated drop of only 22 metres and the reason for its re-introduction to the list, following its removal in the 1981 edition of Munro's Tables, is unclear. 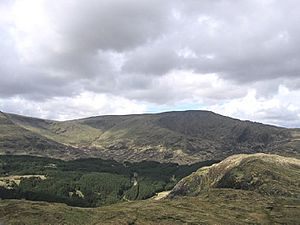 Merrick is both a Corbett and a Donald

The Corbetts are peaks in Scotland that are between 2,500 and 3,000 feet (762.0 and 914.4 m) high with a prominence of at least 500 feet (152.4 m). The list was compiled in the 1920s by John Rooke Corbett, a Bristol-based climber and SMC member, and was published posthumously after his sister passed it to the SMC. 222 Corbetts, many of them in areas of Scotland with no Munros, include Moidart, Ardgour, the Southern Uplands and the islands of Arran, Jura, Rùm and Harris.

The Grahams are mountains in Scotland between 2,000 and 2,499 feet (610 and 762 metres) high, with a drop of at least 150 metres (490 feet) all round. The list of mountains fitting these criteria was first published by Alan Dawson in The Relative Hills of Britain as the Elsies (LCs, short for Lesser Corbetts). They were later named Grahams after the late Fiona Torbet (née Graham) who had compiled a similar list around the same time. Dawson continues to maintain the list, which contains 221 hills distributed as follows: Highlands south of the Great Glen 89, Highlands north of the Great Glen 84, Central and Southern Scotland 23, Skye 10, Mull 7, Harris 3, Jura 2, Arran 1, Rum 1, South Uist 1. The number of Grahams was reduced by three from 224 following surveys in 2014 that showed Corwharn, Ben Aslak and Ladylea Hill to be below 609.6 metres (2,000 feet) high.

Dawson in 2004 published a list of Graham Tops covering Scotland down to 610m of height and 30m of relative height. There are currently 995 of them, including the 221 Grahams.

The Donalds are mountains in the Scottish Lowlands over 2,000 ft (610 m). The list was compiled by Percy Donald, and is maintained by the SMC. Whether a high point is a Donald is determined by a complicated formula. A mountain with a prominence of at least 30 metres (98 ft) is automatically a Donald, but one with a relative height of 15 metres (49 ft) may be one if it is of sufficient topographic interest. There are 140 Donalds, comprising 89 mountains and 51 tops. 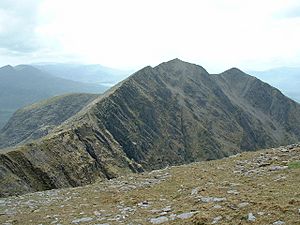 Caher, one of the Irish Furths

Furths are those mountains in Great Britain and Ireland furth of (i.e. "outside") Scotland that would otherwise qualify as Munros or Munro Tops.

They are sometimes referred to as the Irish, English or Welsh Munros. There are 34 furths; fifteen in Wales, thirteen in Ireland and six in England. The highest is Snowdon. The Scottish Mountaineering Club (SMC) maintains the list and records the claims of Munroists who go on to complete the Furths. A full list of these "Furthists", with known completion dates, is available. 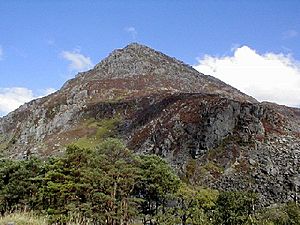 The Hewitts are Hills in England, Wales and Ireland over Two Thousand feet (609.6 m), with a relative height of at least 30 metres (98 ft). The English and Welsh lists were compiled and are maintained by Alan Dawson; the Irish list is by Clem Clements. The list addresses one of the criticisms of the Nuttalls by requiring hills to have a relative height of 30 metres (98 ft), thus excluding the 125 least prominent Nuttalls from the list.

There are 528 Hewitts in total: 179 in England, 138 in Wales and 211 in Ireland. The current TACit booklets contain 525 mountains, with Black Mountain being counted in both England and Wales. Since their publication in 1997, Birks Fell in England and Mynydd Graig Goch have been added and Black Mountain deemed to be in Wales only.

Scottish mountains are, by definition, excluded. Those that meet the criteria are published in three parts: the Murdos, the Corbett Tops, and the Graham Tops. 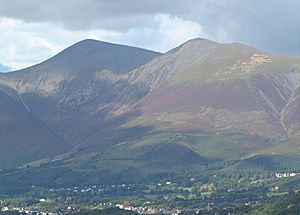 By including high points that rise by as little as 15 metres (49 ft) above their surroundings, the list of Nuttalls is sometimes criticised for including too many insignificant minor tops. The Hewitts (see below) are one attempt to avoid this.

With the exception of Pillar Rock, a rocky outcrop on Pillar in the Lake District, the peaks of all of the Nuttalls can be reached without resort to rock climbing. As of December 2008[update], 163 people are known to have completed the list, though this includes some who did not climb Pillar Rock, which the authors permit.

The Wainwrights are mountains or hills (locally known as fells) in the English Lake District National Park that have a chapter in one of Alfred Wainwright's Pictorial Guides to the Lakeland Fells. There are 214 in the seven guides. There are no qualifications for inclusion other than an implied requirement of being at least 1,000 feet (300 m) high, to which Castle Crag in Borrowdale is the sole exception. A further 116 summits were included in the supplementary guide, The Outlying Fells of Lakeland.

The Birketts are all the fell tops over 1000 feet high (about 305 m) within the boundaries of the Lake District National Park. Height and location but not prominence are the criteria. There are 541 of these tops. They do not include Wainwright's Castle Crag in Borrowdale (at 950 feet (290 m) his only sub-1,000 ft summit) but they do include two higher Castle Crags (one above Thirlmere and one above Haweswater). The list was devised by Bill Birkett as the basis for his book Complete Lakeland Fells. They are listed in the Database of British and Irish Hills. 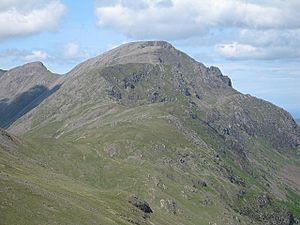 The Marilyns are mountains and hills in the British Isles that have a prominence of at least 150 metres (490 feet), regardless of absolute height or other merit. There are currently 1,556 Marilyns in Great Britain: 1,217 in Scotland, 176 in England, 158 in Wales and 5 on the Isle of Man (Black Mountain, on the England-Wales border, is counted as being in Wales). There are a further 454 Marilyns in Ireland. The list was compiled and is maintained by Alan Dawson. The name was coined as an ironic contrast to the designation Munro, which is homophonous with (Marilyn) Monroe.

Climbing in the highest point of each county within a country or region is another popular form of peak bagging, dating back at least to the 1920s when John Rooke Corbett was attempting to visit all British county tops.

A Simm is a hill in Great Britain or Ireland that is over 600 metres high and has a prominence of at least 30 metres. There are currently 2,529 recorded Simms, including 2,188 Scottish Simms, 192 English Simms, 151 Welsh Simms and 224 Irish Simms. In addition, there is one on the Isle of Man. By definition, all Simms are also TuMPs (see below) and most, if not all, are mountains, depending on whether 600 metres or 2,000 feet (610 m) is used as the criterion.

The Marilyns were supplemented in 2007 by the HuMPs (Hundred Metre Prominence) which reduces the Prominence requirement to 100m. The list was compiled by Mark Jackson from a large number of sources and published online in 2010 in More Relative Hills of Britain. There are almost 3,000 British HuMPs, including three in the Channel Islands.

For other senses of the word Tump (e.g. the traditional name for a low mound), see Tump.

More recently, Mark Jackson compiled the TuMPs, a list of all hills in Britain having a prominence of 30 metres. By definition, all Murdos, Corbett Tops, Graham Tops, Hewitts and Deweys are also TuMPs. There are over 16,000 TuMPs; approximately half of that number that did not appear in previously researched lists were researched by Mark Jackson between 2006 and 2009. Since 2012 the list has been published and maintained by the editors of The Database of British and Irish Hills.

A list of mountains, over 2,000-foot-high, in England and Wales was published by Buxton & Lewis in 1986. Although, it is no longer maintained, it is still referred to in some sources.

In the Lake District especially, there is a tradition of finding the maximum number of tops, including all the major summits, which can be visited in a 24-hour period – see Lakeland 24 hour record. This usually requires fell running, and a support team. The pre-war record, set by Bob Graham, of 42 tops, has become a standard round, which has been repeated by over 1,000 people.

All content from Kiddle encyclopedia articles (including the article images and facts) can be freely used under Attribution-ShareAlike license, unless stated otherwise. Cite this article:
Lists of mountains and hills in the British Isles Facts for Kids. Kiddle Encyclopedia.