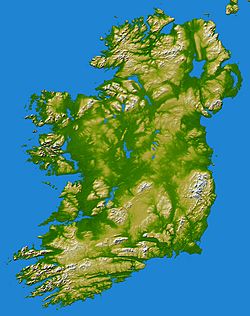 A topographic map of Ireland

This is a list of mountains and mountain ranges in Ireland. It also includes landforms that are usually called hills. Those within Northern Ireland or on the border are marked with an asterisk (*), while the rest are within the Republic of Ireland. Mountain ranges are in bold.

Thirteen peaks are classified by the Scottish Mountaineering Club as Furths i.e. mountains over 3,000 feet (910 m) in the British Isles outside Scotland that are regarded as separate mountains. Ten of these are located in Macgillycuddy's Reeks in County Kerry.

Mountains, in both Great Britain and Ireland, are commonly defined as any summit at least 2,000 feet (610 m) high. In addition, some definitions also include a topographical prominence requirement, typically 100 feet (30 m) or 500 feet (150 m).

All content from Kiddle encyclopedia articles (including the article images and facts) can be freely used under Attribution-ShareAlike license, unless stated otherwise. Cite this article:
List of mountains in Ireland Facts for Kids. Kiddle Encyclopedia.