Kids Encyclopedia Facts
This page is about the Irish hill. For other articles, see Hungry Hill (disambiguation).

Hungry Hill (Irish: Cnoc Daod) is a mountain on the Beara Peninsula, County Cork, in the Republic of Ireland.

The first part of the Irish name Cnoc Daod means "hill". The second part may be a dialectal variant of déad, meaning "tooth", "set of teeth" or "jaw". It has been anglicized as Knockdhead and Knockday. 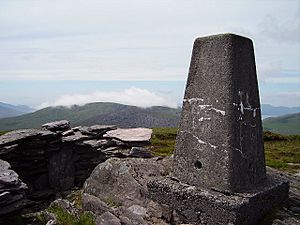 With a height of 685 metres (2,247 ft) it is the highest peak of the Caha Mountains and the 130th highest in Ireland. Hungry Hill lies on the border of counties Cork and Kerry, although the peak is on the Cork side.

There is a cairn at the summit and a number of standing stones to the south and east of the mountain. At its eastern foot are two lakes — Coomadayallig and Coomarkane — which both drain into the Mare's Tail waterfall. This is the highest waterfall in Ireland and the UK.

All content from Kiddle encyclopedia articles (including the article images and facts) can be freely used under Attribution-ShareAlike license, unless stated otherwise. Cite this article:
Hungry Hill Facts for Kids. Kiddle Encyclopedia.