Tibradden Mountain (Irish: Sliabh Thigh Bródáin, meaning mountain of the house of Bródáin) is a mountain in County Dublin in Ireland. Other former names for the mountain include "Garrycastle" and "Kilmainham Begg" (a reference to Kilmainham Priory which once owned the lands around the mountain). It is 467 metres (1,532 feet) high and is the 561st highest mountain in Ireland. It forms part of the group of hills in the Dublin Mountains which comprises Two Rock, Three Rock, Kilmashogue and Tibradden Mountains. The views from the summit encompass Dublin to the north, Two Rock to the east and the Wicklow Mountains to the south and west. The geological composition is mainly granite and the southern slopes are strewn with granite boulders. The summit area is a habitat for heather, furze, gorse and bilberry as well as Sika deer, foxes and badgers. The forestry plantation on the slopes – known as the Pine Forest – contains Scots pine, Japanese larch, European larch, Sitka spruce, oak and beech. The mountain is also a site of archaeological interest with a prehistoric burial site close to the summit.

Close to the summit is a prehistoric burial site. Local tradition associates it, incorrectly, with Niall Glúndub. It was excavated in 1849 by members of the Royal Irish Academy who found a stone-lined cist containing a pottery vessel and cremated remains, now preserved by the National Museum of Ireland in Dublin. In its present form, the site consists of an open circular chamber 10 feet (3.0 metres) in diameter with a narrow passage. For many years, it was believed that this monument was a passage grave and the author Robert Graves refers to it as such in his poetic mythological work The White Goddess (1948). However, conservation work done at the site in 1956 revealed that the chamber and passage were not original features but had probably been created at the time of the original excavation in the nineteenth century. A stone bench was also found in the centre, apparently built for the convenience of visitors to the site. It is now accepted that the monument is in fact a chambered cairn with a cist burial at the centre. The site may be the burial place of Bródáin, after whom the mountain is named. The monument is not at the summit of the mountain but is located slightly to the north at a position where the view across Dublin Bay to Howth is not obscured by Two Rock. Within the chamber itself lies a stone with a spiral pattern. It became a national monument in 1940.

The open cairn with pseudo-passage leading to the centre.

Stone with spiral pattern inside the chamber. 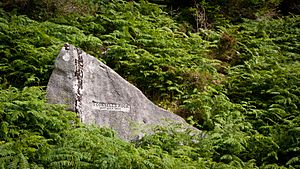 Access to the mountain is possible via the Pine Forest, a Coillte-owned forest recreation area on the slopes of the mountain which is managed by the Dublin Mountains Partnership. Tibradden is also traversed by the Dublin Mountains Way hiking trail that runs between Shankill and Tallaght while the Wicklow Way hiking trail runs to the southeast of the summit. The first part of the Dublin Mountains Way to be completed was the section linking Tibradden, Kilmashogue and Cruagh forests and a dedication plaque marking its opening on 19 June 2009 by Éamon Ó Cuív, TD, Minister for Community, Rural and Gaeltacht Affairs can be found along the route of the Way in the Pine Forest.

There is another dedication plaque in the Pine Forest, near the car park, marking the inauguration of the Dublin Mountains Partnership on 24 October 2008 by Eamon Ryan, TD, Minister for Communications, Energy and Natural Resources.

All content from Kiddle encyclopedia articles (including the article images and facts) can be freely used under Attribution-ShareAlike license, unless stated otherwise. Cite this article:
Tibradden Mountain Facts for Kids. Kiddle Encyclopedia.