Kids Encyclopedia Facts
This page is about the mountain in Kilkenny, Ireland. For the hill and park in Bristol, England, see Brandon Hill, Bristol.
Not to be confused with Mount Brandon.

Brandon Hill (Irish: Cnoc Bhréanail) is the highest mountain in County Kilkenny, Ireland, with an elevation of 515 m (1,690 ft) and prominence at 448 m (1,470 ft). The South Leinster Way, a long-distance trail, meandering through the Barrow Valley and traverses Brandon Hill. The village of Graiguenamanagh and River Barrow are at the base of the hill. It is classified as a county high point, an Arderin, a Myrddyn Dewey, and a Marilyn. 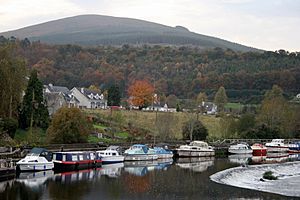 Brandon Hill from the River Barrow in Graiguenamanagh

It is the termination of the chain of granitic mountains that raise from the shores of Dublin bay. The base of Brandon Hill on the side of the River Barrow and the hill running to Graigue is composed of schist rock. This blackish siliceous schistus, sometimes containing grains of quartz and when it is broken it has a shivery texture and is hard enough to scratch glass. There are a few beds of marble and limestone gravel near the foot of the mountain.

Evidence regarding the early settlement of the Brandon Hill uplands came to light as a result of ground and aerial surveys directed by Michael Gibbons, an archaeologist with the Board of Works, in 1989. The survey indicated that the slopes of Brandon were settled in excess of four thousand years ago and that the cairns, house sites, field systems and a large ritual enclosure identified on its slopes are part of the prehistoric remains there. Two Norman moated sites, with long rectangular buildings attached - probably granges or farms attached to Duiske Abbey and thought to be about 600 years old - were also identified on the lower slopes in the Ballyogan townland area during the survey.

All content from Kiddle encyclopedia articles (including the article images and facts) can be freely used under Attribution-ShareAlike license, unless stated otherwise. Cite this article:
Brandon Hill Facts for Kids. Kiddle Encyclopedia.