Mangerton or Mangerton Mountain (Irish: An Mhangarta, meaning the long-haired (mountain)), at 838 metres (2,749 ft), is the 19th-highest peak in Ireland on the Arderin list, and the 26th–highest mountain according to the Vandeleur-Lynam list. Mangerton is the tallest mountain in the Mangerton Mountain Group, also called the Mangerton Mountains or the Mountains of East Kerry, a range that includes five other major mountains that have a height above 2,000 feet (610 m). Mangerton's western slopes lie within the Killarney National Park. On Mangerton's north-western face lies a deep corrie lake called the Devil's Punchbowl, which is a popular scenic destination for hill walkers; although the mountain is often overlooked by walkers due to the proximity of its more scenic and accessible neighbour, Torc Mountain. The far northern slopes of Mangerton was the site of an important 13th-century battle between the Mac Cárthaigh (Gaelic forces), and the FitzGeralds (Norman forces), known as the "Tooreencormick battle site".

Irish academic Paul Tempan notes in the Irish Hill and Mountain Names database that Mangerton is most likely a translation of Irish: An Mhangarta, meaning "the long-haired". Tempan discussed the possibility that an alternative interpretation of Irish: An Mhangartach may be worth considering, as it could be the noun Irish: mangart with the suffix ach. Tempan notes P. S. Dinneen's Foclóir Gaedhilge agus Béarla—Irish-English Dictionary (1927), defines Irish: mangart as "movement" or "shaking". Thus the adjective (not listed in any dictionary) could mean "moving", "shaking", or "quaking", which could refer to the physical movement of Mangerton bog prevalent on the southern slopes, or could be understood figuratively as meaning "vacillating" or "fickle".

Mangerton Mountain (l), Lough Erhogh (c), and Mangerton North Top (r), seen from across the Horse's Glen from the summit of Stoompa

Mangerton's flat boggy summit plateau includes the satellite summits of Mangerton North Top 782 metres (2,566 ft) and Glencappul Top 700 metres (2,300 ft), and its "horseshoe-shaped" massif includes the summit of Stoompa 705 metres (2,313 ft). The Horses' Glen (or Glencappul), and the Devil's Punchbowl carve deep hollows, or corries on the north-west and north-east sides of Mangerton's massif, but the southern flanks form a huge plateau, one of the most extensive areas of mountain wilderness in Ireland, where herds of red deer and sika deer still roam.

There are three lochs that flow from Managerton's corries into the Horse's Glen (or Glencappul), namely the lowest, Lough Garagarry (Loch Garaigre), the middle, Lough Mannagh (Loch Meáin) and the Lough Erhogh, which is a hanging glacial lake set into a corrie on Mangerton's north-east face. 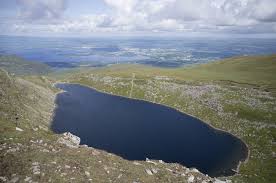 Devil's Punchbowl on the north-west face of Mangerton

The Devil's Punchbowl (Irish: Poll Ifrinn), at 670 metres (2,200 ft) on Mangerton's north-west face is a deep oval-shaped corrie filled by a loch in its base that drains into the Owengarriff River from which Torc Waterfall is formed, before finally flowing into the Lakes of Killarney below. Mangerton's western slopes lie within the Killarney National Park.

Mangerton Mountain's height and topographic prominence, qualifies it to meet the British Isles Marilyn classification, as well as the Arderin, Simm and Hewitt classifications. Mangerton Mountain ranks as the 10th-highest mountain in Ireland on the MountainViews Online Database, 100 Highest Irish Mountains, where the prominence threshold is over 100 metres (e.g. higher mountains with sub-100-metre prominences are excluded). 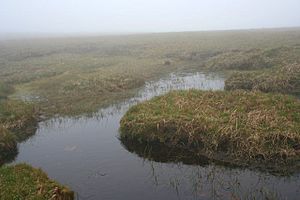 Mangerton's flat boggy summit plateau means that it can get overlooked when guidebooks of Ireland's best walks are compiled, particularly given its proximity to the rocky ridges and summits of the MacGillycuddy's Reeks; sometimes even nearby Torc Mountain is recommended instead. However, Mangerton's scale, summit views and deep corries are well regarded, and its proximity to Killarney town and ease of access are recognised by climbers.

The most direct route to the summit of Mangerton is via the 4–5 hour 10-kilometre (6.2 mi) Devil's Punchbowl Route. It starts from the concrete slab bridge (at V984847), and follows a worn track southwards up to the Devil's Punchbowl at 670 metres (2,200 ft), before reaching the Mangerton summit plateau via the west ridge of the Punchbowl, and then walking circa 300 metres across the plateau to the true summit of Mangerton itself, before returning via the same route (or taking the steeper eastern arete of the Punchbowl). The summit plateau of Mangerton can be difficult to navigate in poor or misty weather as there are few features. 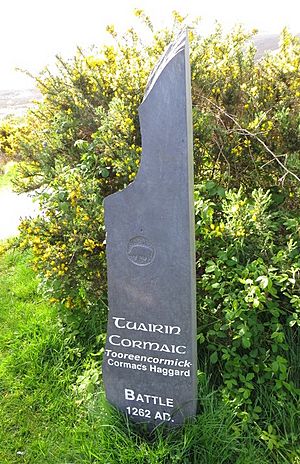 Memorial stone for the 1262 battle site of Tooreencormick

The far northern slope of Mangerton was the site of a battle in 1262 between the Mac Cárthaigh (Gaelic forces, being the Kingdom of Desmond) and the FitzGeralds (Anglo-Norman forces, being the Geraldines), following the rout at the Battle of Callann Glen near Kilgarvan the previous year. The battle site is marked on the ordnance maps and also by a commemorative stone monument, and is known as Tooreencormick (Irish: Tuairín Cormaic, meaning little field of Cormac) after Cormac MacCarthy Reagh, who was killed during the clash (his brother Fínghin Mac Carthaigh had been killed at the Battle of Callann). Other notable knights including Gerald Roche, "the third best baron in Erin", were slain at Tooreencormick. Despite the losses, the battle is considered a MacCarthy success as the Anglo-Normans were kept out of South Kerry and West Cork (i.e. the Kingdom of Desmond), for the next three centuries.

In spite of such two-edged victories, the battle of Callann and Tuairin Cormaic, for good or for evil, effectually prevented the establishment of an Anglo-Norman rule in [The Kingdom of] Desmond. It is that owing to dissensions among the Irish tribes the earls of Desmond eventually ' overtopped them all ', but in the region from which they drew their title they had more of the character of a Celtic chief than of a feudal lord, and it was left to the more resolute Tudor statesman and ruthless Tudor generals to break down the clan-system there.

All content from Kiddle encyclopedia articles (including the article images and facts) can be freely used under Attribution-ShareAlike license, unless stated otherwise. Cite this article:
Mangerton Mountain Facts for Kids. Kiddle Encyclopedia.