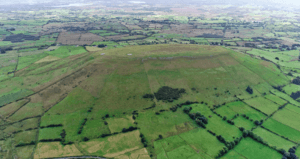 The River Moy rises at the foot of Knocknashee.

Knocknashee hill consists of a limestone top with shales underlying the lower slopes.

Knocknashee was identified as a hilltop fort in 1988. It is an enclosed hill fort with limestone ramparts containing cairns, burial chambers and hutsites. The fort is 700 metres long and 320 metres wide and is enclosed by two earth and stone ramparts covering an area of 53 acres. The site was discovered during an aerial survey of county Sligo by the Office of Public Works in 1988.

The name of the plateau itself comes from Irish, ‘knock’ (cnoc) meaning ‘hill’ and ‘shee’ (sí) meaning ‘burial mound’ or 'of the fairies'. In older Irish Knocknashee is known as Mullinabreena.

All content from Kiddle encyclopedia articles (including the article images and facts) can be freely used under Attribution-ShareAlike license, unless stated otherwise. Cite this article:
Knocknashee Facts for Kids. Kiddle Encyclopedia.