Benaughlin Mountain (from Irish: Binn Eachlabhra) is a mountain in the Cuilcagh Mountain range in County Fermanagh, Northern Ireland. Its composition is mainly of sandstone, limestone and shale.

At its highest point, Benaughlin is 373 metres (1,224 ft) above sea level. A section of the Ulster Way passes around the side of the mountain, within 300 m of the summit.

The name Benaughlin comes from the Irish: Binn Eachlabhra which means "peak of the speaking horse". Legends tell of a large, white horse (An Chopail Bán) which would appear on the slopes of the mountain each year on the last Sunday of July, and talk to local people. The mountain is also known as Bin Mountain to local residents. 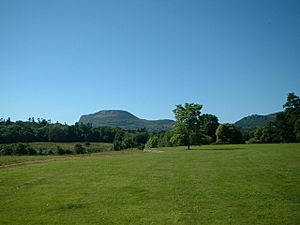 Benaughlin Mountain viewed from the Florence Court estate in mid-summer

The blanket bog which covers the mountain was used as a source of fuel for the wealthy landowners in the area who lived in the nearby stately home of Florence Court. A path known as the Donkey Trail meanders up the side of the mountain; this was the route used for bringing the turf down off the mountain side.

All content from Kiddle encyclopedia articles (including the article images and facts) can be freely used under Attribution-ShareAlike license, unless stated otherwise. Cite this article:
Benaughlin Mountain Facts for Kids. Kiddle Encyclopedia.