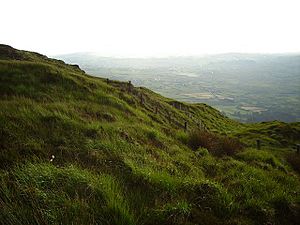 The mountainside to the west of the summit

Mount Gabriel (Irish: Cnoc Osta) is a mountain on the Mizen Peninsula situated immediately to the north of the town of Schull, in West Cork, Ireland.

Mt. Gabriel is 407m high and is the highest eminence in the coastal zone south and east of Bantry Bay. A roadway serving the radar installations on the summit is open to the public.

From the peak of Mt. Gabriel, there are views South over Schull Harbour and Long Island Bay. To the east and southeast, the views take in Roaring Water Bay and its many islands, popularly known as Carbery's Hundred Isles. North and West is a view of the mountains of the Beara Peninsula and South Kerry.

The Fastnet Rock is situated approximately 18 km to the South, and is visible in fine weather.

On the southern and eastern slopes of the mountain is evidence of Bronze Age mining activity. The principal ore mined for was Copper. Some of the archaeological items found on the mountain are now found in the National Museum in Dublin.

In the late 1970s, as part of the development of Eurocontrol (the European air traffic control system), two radar domes were built on the top of the mountain.

1982 the Irish National Liberation Army, an Irish republican paramilitary group blew up the radar domes, wrongly claiming that they were being used by NATO in violation of Irish neutrality.

All content from Kiddle encyclopedia articles (including the article images and facts) can be freely used under Attribution-ShareAlike license, unless stated otherwise. Cite this article:
Mount Gabriel Facts for Kids. Kiddle Encyclopedia.