Slieve na Calliagh (Irish: Sliabh na Caillí, meaning the Cailleach's mountain) is a range of hills and archaeological site near Oldcastle, County Meath, Ireland. The summit is 276 metres (906 ft), the highest point in the county, and an important site for megalithic tombs.

The hills are named after the Cailleach, the divine hag of Irish mythology. Legend has it that the monuments were created when a giant hag, striding across the land, dropped her cargo of large stones from her apron. 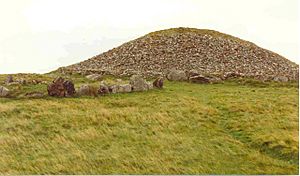 Burial chamber at the summit

On various hilltops are megalithic tombs dating back to the 4th millennium BC. These tombs are also known as the Slieve na Calliagh, These tombs were described by the archaeologist E.A. Conwell in 1864 when he presented a paper to the Royal Irish Academy. Conwel's surveys and investigations were followed by those of Rotherham in 1895, and George Coffey at the start of the 20th century. The cairns are likely predate the ones at Brú na Bóinne and much of their art anticipates similar forms used later at sites in the valley of the Boyne. The cairns are passage graves which date from around 3,000 B.C.E and research on human remains found in association with similar monuments elsewhere in Ireland suggests that the builders were the descendants of people who settled in Ireland from modern Brittany around 4,200 B.C.E.. The two main cairns on the site are tumuli known as Cairn L and Cairn T, Cairn T is also called Tomb of the Ollamh Fodhla or the Hag's Cairn, and so far more than 30 existing archaeological sites have been identified and there may once have been between fifty and one hundred mounds in the area. Within Cairn T is a carved stone, called the Equinox Stone, which is illuminated by the sun at the dawn of the Spring equinox, above this stone is a decorated ceiling stone which is also illuminated by the sun during the sunrise at the Spring equinox.

All content from Kiddle encyclopedia articles (including the article images and facts) can be freely used under Attribution-ShareAlike license, unless stated otherwise. Cite this article:
Slieve na Calliagh Facts for Kids. Kiddle Encyclopedia.