Luggala (Irish: Log an Lá, meaning Hollow of the hill), also called Fancy Mountain (from Irish Fuinnse, meaning 'ash-tree') at 595 metres (1,952 ft), is the 230th-highest peak in Ireland on the Arderin scale. Being below 600 metres (2,000 ft), it does not rank on the Vandeleur-Lynam or Hewitt scales. Luggala is in the northeastern section of the Wicklow Mountains in Ireland, and overlooks the Lough Tay, which lies at the base of the steep granite cliffs on Luggala's eastern face. As well as a noted scenic point in County Wicklow, Luggala's eastern cliffs have many graded rock-climbing routes.

Luggala and Lough Tay are part of the larger 5,000-acre (2,000 ha) privately-owned Padulli di Vighignolo Estate, which also includes Luggala Lodge. The estate dates from the 18th-century when it was developed by the La Touche family, and then by the Guinness family from 1937 to its sale in 2019. The estate was the location of several films (e.g. Braveheart in 1995), and television series (e.g. Vikings from 2013), as well as visits by notable artists and musicians (e.g. the Beatles and Michael Jackson). A degree of access is granted to the public.

Historian Liam Price notes that Luggala, from Irish Log an Lá, meaning 'Hollow of the hill', was also known as Fancy, from Irish: Fuinnse, meaning ash-tree, and also as Cloghoge (the nearby Cloghoge River drains Lough Tay into Lough Dan). According to Irish academic Paul Tempan, "Price's interpretation of this name [Luggala] as Log an Lágh, or 'hollow of the hill', is doubtful"; pointing out that there is no evidence in any Irish language dictionaries for the existence of the term "lágh". He also notes that the other term "Lá" is unlikely to be a translation of "day"; instead, Tempan records the translation as unresolved listing it in Irish Hill and Mountain Names as "hollow of the [obscure element]".

Luggala is in the northeastern section of the Wicklow Mountains, and directly overlooks Lough Tay, which lies at the base of steep granite cliffs on Luggala's east face; Luggala's other slopes are of a much gentler gradient, and are mostly covered in heather. The mountain is a largely isolated peak, with a deep valley between itself and its only neighbour, the peak of Knocknacloghoge 534 metres (1,752 ft) to the immediate south. Luggala is overlooked from the far north-east by the larger massif of Djouce at 725 metres (2,379 ft). Luggala is the 230th-highest peak in Ireland on the Arderin scale, Being below 600 metres (2,000 ft) in height, Luggala does not rank on the Vandeleur-Lynam or Hewitt scales. 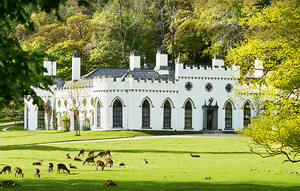 Luggala forms a part of the 5,000-acre (2,000 ha) Luggala Estate (also known as the Guinness Estate after the Guinness family), which was owned by wealthy arts patron Garech Browne, the great-great-great-grandson of Arthur Guinness, until his death in 2018. In 2018, the Luggala Estate included the mountains of Luggala and Knocknacloghoge, the entire lake of Lough Tay, and part of the lake of Lough Dan.

The estate was developed by the La Touche family, who founded the Bank of Ireland. In 1787, Peter LaTouche built the gothic Luggala Lodge (or "Luggala Castle"), as a hunting lodge which he modelled on Strawberry Hill House in London. In 1937, Ernest Guinness purchased the Luggala Estate and then gave it as a wedding gift to his daughter Oonagh on her second marriage, to Lord Oranmore and Browne; she then gifted the property to her son Garech in 1970. Notable family members buried on the estate include Tara Browne, whose death in a car accident was an inspiration for the Beatles song, A Day in the Life.

By 2018, Luggala Lodge was a 7,437 square feet (690.9 m2), seven-bedroom property, and the entire estate had 16,379 square feet (1,521.7 m2) of residential property. The buildings on the estate, including the Lodge, have been rented out commercially, and have included famous guests such as Mick Jagger, the Beatles and latterly, Michael Jackson. The estate and grounds have been used as the location of some films, including Zardoz (1974), Excalibur (1981), Braveheart (1995), and King Arthur (2004), as well as the historical drama television series Vikings (from 2013), where it is featured as the fictional village of Kattegat.

In 2017, before his death, Browne put the entire estate up for sale with an asking price of 28 million euros. In 2006, Browne had sold 1,600 acres (650 ha) of the estate to the Irish state for 1.6 million euros, and it is now part of the Wicklow Mountains National Park. On 27 August 2019, the Irish Times reported that the estate had been sold to an overseas buyer at a "substantial discount" to the asking price. In October 2019, several newspapers reported that the estate had been bought by Italian Count Padulli di Vighignolo and his wife Carolyn Dolgenos, for a sum estimated at 20 million euros.

In December 2019, RTÉ aired a documentary titled Last Days at Luggala on Garech Browne's final years on the estate, up until his death in 2018. In January 2020, the entire contents of the estate as owned by Browne, were auctioned at Sotheby's in London. 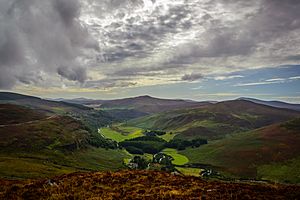 Looking down on to the Cloghoge River in the estate, to which hill-walkers have been allowed access

In 2018, the Barbican International Corporation (BIC), a Guinness family Guernsey-based trust who controlled the Luggala Estate, erected new "private property" signage and a notice on a gate just off the R759 road frequently used by the public – called the "Pier gate" – that it would be locked after 5.30 pm.

The BIC trust clarified in a statement that: "There are no public rights of way or rights of access to any of the estate. However, successive owners over recent years permitted public access to certain parts of the estate via the present pedestrian access gate [the Pier gate]".

The action led to protests by hill-walking groups, and calls on the Irish state to purchase the Luggala Estate – which was being offered for sale by the BIC trust for Euro 28 million – and which was bordered on three sides by the Wicklow Mountains National Park.

In November 2019, it was reported that the new owners of the estate would leave existing public access arrangements in place (e.g. gate open until 5.30 pm). 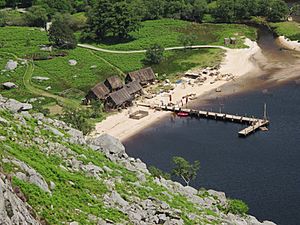 Looking down Luggala's east face to the set of Kattegat for Vikings, on the northern shore of Lough Tay

Access permitting, the most common route to the summit of Luggala is from the public access gate on the R759 – known as the "Pier gates" (O173065). This 7-kilometre (4.3 mi), circa 2.5-hour route (to the summit and back), descends a tarmac road down to the bridge of Cloghoge River, where it then leaves the road (that continues on to Lough Dan), to ascend up the 400 metres (1,300 ft) long shoulder to the summit ridge of Luggala; the path is then retraced back to the Pier gates. There is a sandy/gravel mountain path from just beyond the bridge of Cloghoge River, that cuts through the ferns and heathers on Luggala, to the final summit ridge, however, it can be difficult to find in poor weather or low visibility.

A longer 12-kilometre (7.5 mi), circa 5-hour route, incorporates the neighbouring peak of Knocknacloghoge and Lough Dan, before returning to the Pier gates; it is described as "surely one of the most scenic walks in the Wicklow Mountains". 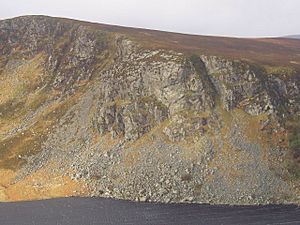 Luggala's east-facing granite cliffs are a rock-climbing location, however, route-finding can be difficult and the conditions are described as a "serious mountain crag". As of July 2019[update], the online climbing database lists 129 climbs, with the majority in the Very Severe (VS) 4c to E1 5b rock climbing grade categories, however, there are also several extreme routes such as Precious Metal (E7 6c), and The Great Roof (E6 5c, 6c).

The Irish Online Climbing Database records five major sections: G & H Buttresses, Woody Wall & Conifer Buttress (Creag Conaisreach), South Buttress (Creag Fasra), Main Face, and North Buttress (Creag Thuaidh). It notes the rock is coarser with better friction than that of Glendalough, however, in contrast to Glendalough, the routes are less direct and do not follow obvious crack-lines; it also notes that the zig-zag nature of routes means that an ability to use double-rope techniques is important to avoid friction drag. Classic climbs are Pine Tree Buttress (S 4a), Muskrat Ramble (HVC 4b, 5a, 4c), and Dance of the Tumblers (E1 5b).

All content from Kiddle encyclopedia articles (including the article images and facts) can be freely used under Attribution-ShareAlike license, unless stated otherwise. Cite this article:
Luggala Facts for Kids. Kiddle Encyclopedia.