Kids Encyclopedia Facts
Not to be confused with Croghan Hill.
For Croaghaun in the Blackstairs Mountains, see Croaghaun, County Carlow. 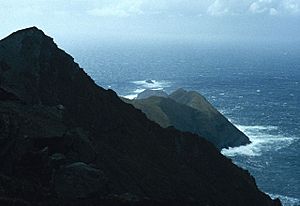 Croaghaun is the most westerly peak of Achill Island, and its highest mountain. Its cliffs lie on the northern slope of the mountain. The cliffs at Croaghaun can only be seen by hiking around or to the summit of the mountain, or from the sea. They are part of a sequence of sheer rock faces which start south of Keem Bay and loop around the uninhabited north-west of the island, by Achill Head and Saddle Head, and east to Slievemore, occasionally dropping vertically into the waters of the Atlantic Ocean.

The Croaghaun cliffs are home to two families of peregrine falcons (RTÉ, 2008). September and October are the best time to see the fastest creatures on Earth here, as they teach their young to fly. Metamorphic, quartz-laden gems may be observed, along with Mediterranean heathers and the waters of the Atlantic. It is common to see schools of bottlenose dolphins and basking sharks, once a source of revenue for Achill Island (BBC, 2009). Porpoises are found in large numbers. Killer whales, humpback whales, and other whales have been sighted.

All content from Kiddle encyclopedia articles (including the article images and facts) can be freely used under Attribution-ShareAlike license, unless stated otherwise. Cite this article:
Croaghaun Facts for Kids. Kiddle Encyclopedia.