Cnoc na Péiste (Irish for "hill of the serpent"), anglicised Knocknapeasta, at 988 metres (3,241 ft), is the fourth-highest peak in Ireland, on the Arderin and Vandeleur-Lynam lists. Cnoc na Péiste is part of the MacGillycuddy's Reeks range in County Kerry. It is one of only two 3,000 ft peaks in the Reeks with a prominence above the Marilyn threshold of 150 metres, and is the highest summit of the Eastern Reeks. In 1943, a USAAF plane crashed into the mountain, killing all five crew, and parts of the wreckage can still be seen in Lough Cummeenapeasta. 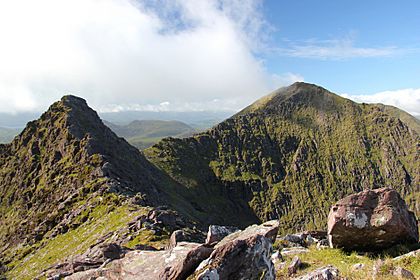 Cnoc na Péiste is the highest point in the Eastern Reeks section of the MacGillycuddy's Reeks range, which consists of a long narrow ridge that takes in several summits before ending at Cruach Mhór 932 metres (3,058 ft) and descending into the Gap of Dunloe, to the Head of the Gap, only to rise up again towards the Purple Mountain Group.

To the southwest of Cnoc na Péiste is the peak of Maolán Buí at 973 metres (3,192 ft) and a generally flat grassy ridge to the col at the Devil's Ladder. To the northeast is the narrow sharp rocky arête that joins with The Big Gun 939 metres (3,081 ft), and Cruach Mhór 932 metres (3,058 ft), which marks the end of the eastern ridge of the Reeks.

Between Cnoc na Péiste and The Big Gun are two small lakes—Loch Coimín Piast (anglicised Lough Cummeenapeasta) and Lough Googh — one on either side of the ridge. A stream called Glasheencummeennapeasta flows northwards from Lough Cummeenapeasta into Hag's Glen, to join the Gaddagh River. On the other side of the ridge, a stream flows southwards from Lough Googh into the Derrycarna River.

Because of its positioning, Cnoc na Péiste is usually climbed as part of a horseshoe of the eastern section of the Reeks, starting from the Hag's Glen, and taking in Maolan Bui and The Big Gun, or as part of the even longer MacGillycuddy's Reeks Ridge Walk.

It is the 231st-highest mountain in Britain and Ireland on the Simm classification. Cnoc na Péiste is regarded by the Scottish Mountaineering Club ("SMC") as one of 34 Furths, which is a mountain above 3,000 ft (914 m) in elevation, and meets the other SMC criteria for a Munro (e.g. "sufficient separation"), but which is outside of (or furth) Scotland; which is why Knocknapeasta is sometimes referred to as one of the 13 Irish Munros.

At about 7 am on 17 December 1943, during World War II, a United States Army Air Forces (USAAF) plane crashed into the northerly face of Cnoc na Péiste. The plane was a Douglas C-47 or Dakota (serial number 43-30719) with five crewmen aboard. It struck the mountain just above Lough Cummeenapeasta at an altitude of about 2,000 ft—killing all five passengers. The Gardaí were not alerted to the crash until 3 February 1944, and the following day an Irish Army detachment was sent to recover the bodies. Pieces of the aircraft can still be seen on the mountainside, and in the lake below (a rope is tied to a piece of the wreckage in the water). A plaque was placed at the shore of the lake to commemorate the victims.

All content from Kiddle encyclopedia articles (including the article images and facts) can be freely used under Attribution-ShareAlike license, unless stated otherwise. Cite this article:
Cnoc na Péiste Facts for Kids. Kiddle Encyclopedia.