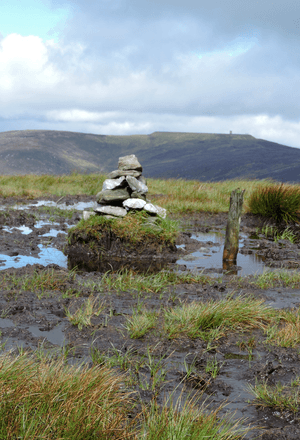 Mullacor (Irish: Mullaigh Mhór, meaning big hilltop) at 661 metres (2,169 ft), is the 141st–highest peak in Ireland on the Arderin scale, and the 172nd–highest peak on the Vandeleur-Lynam scale. Mullacor is situated in the southern sector of the Wicklow Mountains range, and forms a broad horseshoe around the Upper Lake of the Glendalough valley with the mountains of Lugduff 652 metres (2,139 ft), Conavalla 734 metres (2,408 ft), the hydroelectric station at Turlough Hill 681 metres (2,234 ft), and Camaderry 699 metres (2,293 ft). Mullacor's western flank forms the step sides of the neighbouring Glenmalure valley. To the east of Mullacor is Cullentragh Mountain 510 metres (1,670 ft).

Mullacor's prominence of 102 metres (335 ft) does not qualify it as a Marilyn, but it does rank it as the 90th-highest mountain in Ireland on the MountainViews Online Database, 100 Highest Irish Mountains, where the minimum prominence threshold is 100 metres.

All content from Kiddle encyclopedia articles (including the article images and facts) can be freely used under Attribution-ShareAlike license, unless stated otherwise. Cite this article:
Mullacor Facts for Kids. Kiddle Encyclopedia.