Turlough Hill (Irish: Cnoc an Turlaigh, meaning Hill of the Turlach), also known as Tomaneena (Irish: Tuaim an Aonaigh, meaning mound of the assembly/fair), is a 681-metre-high (2,234 ft) mountain in County Wicklow in Ireland and site of Ireland's only pumped-storage hydroelectricity plant. The power station is owned and operated by the ESB and can generate up to 292 megawatts (392,000 hp) of electricity at times of peak demand. 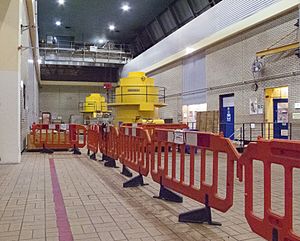 A photo of the Generator Hall in 2014 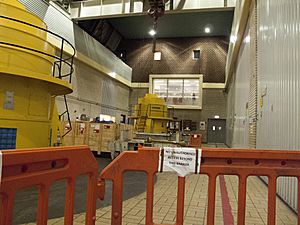 Another photo of the Generator Hall

The historian Liam Price recorded that the mountain was known locally as Tomaneena; Turlough Hill is the name given to it by the ESB when they surveyed the site for the pumped-storage scheme. It is 681 metres (2,234 ft) high and is the 136th highest summit in Ireland. The summit is located to the south-west of the upper reservoir and is easily reached via the tarmac access road that begins at the top of the Wicklow Gap. It is also possible to reach the summit from Glendalough or from the summits of neighbouring Camaderry and Conavalla mountains.

The underlying geology of the mountain is granite, covered with blanket bog, which is a habitat for heather, purple moor grass and sphagnum moss. A number of alpine plants grow near the summit: dwarf willow, cowberry, crowberry, fir clubmoss and common bilberry. To the north-east of the summit, at the head of Glendasan valley, is Lough Nahanagan (Irish: Loch na hOnchon, meaning Lake of the Water Monster), a corrie lake carved by a glacier at the end of the last ice age. 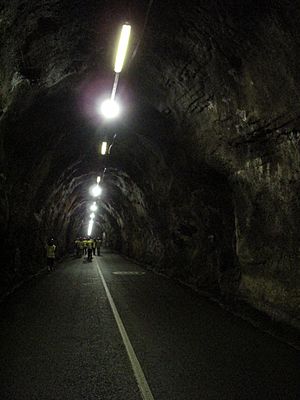 The Turlough Hill Power Station is owned and operated by the Electricity Supply Board (ESB). Construction commenced in 1968, and the station became fully operational in 1974.

Whilst the original name is Tomaneena, renaming it ‘Turlough Hill’ has a certain validity. The pumped storage station draws water from the mountain top lake, which thus becomes a ‘dry lake’. There is a geological feature known as a Turlough; it is defined as "(in Ireland) a low-lying area on limestone which becomes flooded in wet weather through the welling up of groundwater from the rock. Origin late 17th cent.: from Irish turloch, from tur ‘dry’ + loch ‘lake’."

All content from Kiddle encyclopedia articles (including the article images and facts) can be freely used under Attribution-ShareAlike license, unless stated otherwise. Cite this article:
Turlough Hill Facts for Kids. Kiddle Encyclopedia.