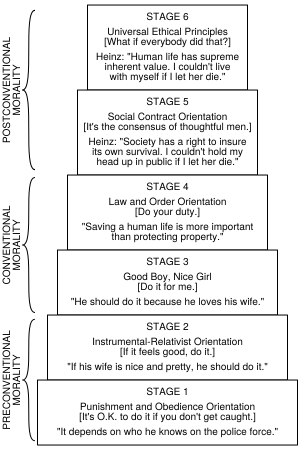 The stages of moral development

Lawrence Kohlberg (25 October 1927 – 19 January 1987) was an American psychologist. Today, he is mostly known for his theory, that the development of a sense of what is morally right or wrong occurs in different stages. There are three main stages, which are subdivided:

All content from Kiddle encyclopedia articles (including the article images and facts) can be freely used under Attribution-ShareAlike license, unless stated otherwise. Cite this article:
Lawrence Kohlberg Facts for Kids. Kiddle Encyclopedia.