Lea Gottlieb (September 17, 1918 - November 17, 2012) was an Israeli fashion designer and businesswoman. She immigrated to Israel from Hungary after World War II, and founded the Gottex company.

Lea Lenke Roth (later Gottlieb) was born in Sajószentpéter, Hungary. Before World War II began, she was planning to study chemistry. During Germany's occupation of Hungary in the mid-1940s, her husband Armin was shipped to a labor camp. Gottlieb—who was Jewish—hid from the Nazis in Sajószentpéter and Budapest, moving from one hiding place to another with her daughters Miriam and Judith. At checkpoints, she hid her head in a bouquet of flowers to avoid being recognized as a Jew. Once, after seeing a Nazi with a pistol, she concealed herself and her children in a pit behind a house. 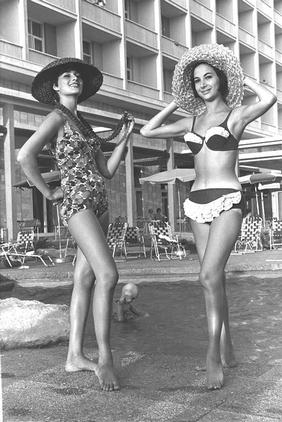 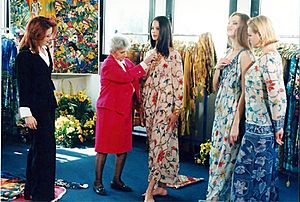 Gottlieb and her family survived the war, and after the liberation, she and her husband ran a raincoat factory in Czechoslovakia. They immigrated to Haifa, Israel in 1949. She recalled: "We came with nothing, without money, with nowhere to live. The first two or three years were very, very hard."

With money borrowed from family and friends, she and her husband opened a similar raincoat factory near Tel Aviv in 1949. But for months, they "saw no rain, only sunshine."

As a result, in 1956 they founded Gottex, a high-fashion beachwear and swimwear company that became a leading exporter, shipping to 80 countries. The company's name is a combination of "Gottlieb" and "textiles".

Gottlieb, a seamstress, began by selling her wedding ring to raise money to buy fabric. She borrowed a sewing machine, and sewed swimsuits in their Jaffa apartment.

She was the company's chief designer. As the company expanded, Gottlieb created beach outfits by complementing swimsuits with matching tops, pareos, caftans, tunics, loose pants, small corsets and skirts. Her collections often had dramatic and varied patterns that were inspired by and dominated by flowers, which she felt had saved her life during the Nazi occupation.

In 1973, when the Yom Kippur War broke out, Gottlieb canceled a foreign tour, took over operations at Gottex, and arranged fashion shows for front-line soldiers. By 1984, Gottex had sales of $40 million ($82 million in current dollar terms), and was the leading exporter of fashion swimwear to the United States, and had two-thirds of the Israeli swimwear market. Among those who wore the company's bathing suits were Diana, Princess of Wales, Spain's Queen Sofia, Elizabeth Taylor, Brooke Shields and Nancy Kissinger. In 1991, almost half of the company's $60 million business was in the United States.

Lev Leviev, the owner of the Africa-Israel Group, acquired Gottex in 1997. After about a year heading the design team, Gottlieb left the company. Once her non-compete agreement with Gottex expired, at the age of 85 she founded a new swimwear design company, under her own name.

All content from Kiddle encyclopedia articles (including the article images and facts) can be freely used under Attribution-ShareAlike license, unless stated otherwise. Cite this article:
Lea Gottlieb Facts for Kids. Kiddle Encyclopedia.