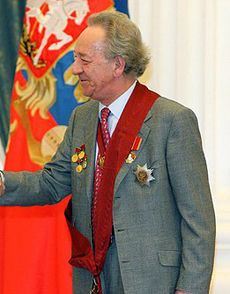 The orchestra started in 1882. It was then called the "Imperial Music Choir". It was the orchestra that belonged to the emperor and it played privately for the court of Alexander III of Russia.

By the 1900s it had started to give public performances. Richard Strauss conducted the orchestra in 1912.

Evgeny Mravinsky conducted the orchestra for 50 years. They were not allowed to travel abroad, so they were only known outside Russia (the USSR) by their gramophone recordings. Symphony no 8 by Shostakovich was one famous work of which they gave the first performance.

By 1991 Leningrad had changed its name again to Saint Petersburg, so the orchestra was renamed Saint Petersburg Philharmonic Orchestra. It is an internationally well-known orchestra. Their conductor today is Yuri Temirkanov.

All content from Kiddle encyclopedia articles (including the article images and facts) can be freely used under Attribution-ShareAlike license, unless stated otherwise. Cite this article:
Saint Petersburg Philharmonic Orchestra Facts for Kids. Kiddle Encyclopedia.