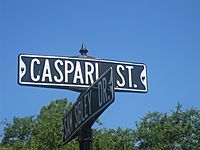 Leopold Caspari (July 28, 1830 – March 11, 1915) was a Louisiana businessman and politician who served in the Louisiana House of Representatives from 1884 to 1892, where he advocated the establishment of Northwestern State University.

Born in Lauterbourg, northeastern France, he came to Louisiana after the Revolution of 1848, and served in the Confederate States of America during the Civil War, gaining the rank of captain.

All content from Kiddle encyclopedia articles (including the article images and facts) can be freely used under Attribution-ShareAlike license, unless stated otherwise. Cite this article:
Leopold Caspari Facts for Kids. Kiddle Encyclopedia.