The southern sandslider (Lerista labialis) is a species of skink or Scincidae. The species is endemic to Australia and widespread across the continent, being most commonly found within sandy termite mounds. This is where they take safe refuge from the harsh Australian climate and various ground predators.

The southern sandslider is a small skink, with a snake-like body and tail. It is red to brown in colour with a darker brown line on the side, being very similar to Lerista bipes. The skink has no fore limbs and the hind limbs are small. The southern sandslider has one supraocular (scales lying above the eyes) between the eyes and no supraciliaries (small scales along the outer margin of the upper eyelid).

There are eight synonym for the southern sandslider, these include: 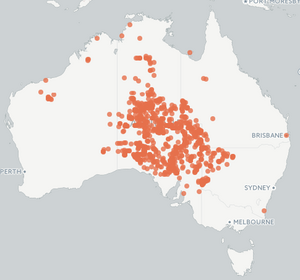 Southern sandsliders are found throughout the desert plains of Western Australia, the Northern Territory, Western Queensland and New South Wales.

Southern sandsliders are most commonly found within the dune crests. This is mainly due to the suitability of this habitat in that it provides them with optimum temperatures, an adequate supply of food and the vegetation sparseness results in soft sandy areas that can aid in the reduction of energy costs (being able to move easily).

Southern sandsliders are fossorial, nocturnal (night-active), and terrestrial. They have a very narrow preferred body temperature range, ranging between 21–36 °C. They are found within dunes not only for the availability of food but for its thermoregulation. The southern sandslider swims through the loose sand of termite mounds.

They are abundant in sandy deserts with vegetation cover that is sparse on dune crests. This benefits the species allowing for unrestrained burrowing. Dunes provide an optimum temperature for the survival of the skinks as well as providing their food source.

The southern sandsliders breed throughout summer, however the Lerista species tend to breed in winter during the dry season. They lay shelled eggs within November and February with the clutch size generally being an average of 2. The southern sandsliders sex cannot be determined by an external examination, the only way to determine the sex of the individual is through internal examination.

Southern sandsiders have diets that consume mostly termites, and this makes up at least 78% of their diet, with the last 22% resulting in invertebrate classes including that of Hemiptera, Neuroptera etc. The southern sandsliders catch their food by foraging below the ground surface

Southern sandsliders are not affected by the seasonal changes but are rain dependent on their food availability, however they will source other species of prey if they need to. They do not need to drink; as they receive water and re-hydrate through the food they eat.

There are currently no major threats for the Southern sandslider, their protection status is considered as least concerned wildlife.

All content from Kiddle encyclopedia articles (including the article images and facts) can be freely used under Attribution-ShareAlike license, unless stated otherwise. Cite this article:
Lerista labialis Facts for Kids. Kiddle Encyclopedia.